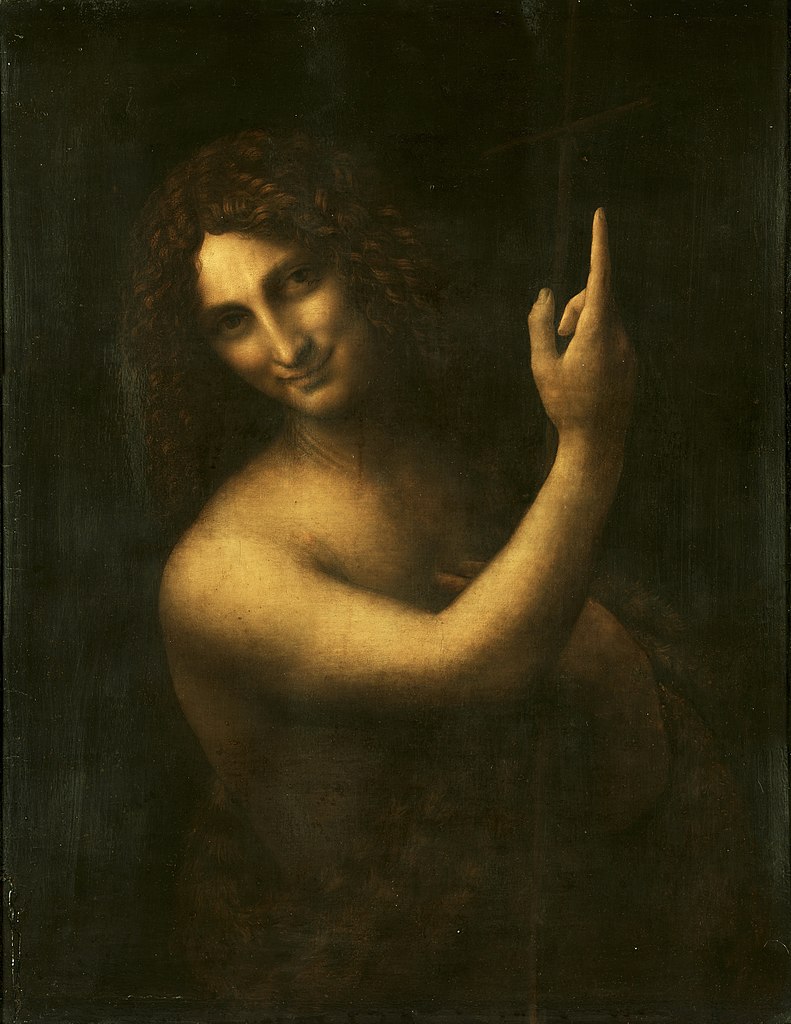 Fabric is more geometry than network.  Images are like maps of terrain, multi-purpose structures like those of the brain, upon which unceasing streams of information form scenes, stories, and the transient phenomena we sometimes call networks.

As Leonardo’s final painting, Saint John the Baptist’s stark simplicity, glowing to emerge from deep surrounding darkness and clothed only in ascetic animal hide, poses interesting questions.  How does it resemble and differ from his penultimate work the Mona Lisa?

John is sometimes called “the Forerunner,” and Leonardo may well have interpreted this in the sense of a new modernity.  The saint is depicted youthful and robust, not elderly and gaunt, which evokes the burgeoning confidence of the new Renaissance arts and sciences.  Gazing at the end of his life into the modern future he did so much to usher in, Leonardo’s figure here confronts the viewer smiling, chiastic, and complex, yet has none of the replete serenity of the Mona Lisa.

Perhaps Leonardo means to say that the balanced, holistic garment of the ML, authored and engineered in rich harmony with the natural world, is not a guaranteed result but only a vision of one possible future.  The work of building a sustainable modernity -- perhaps humanity’s most important design challenge -- is not done but barely begun.  And who is responsible for this future?  We, the viewers, the students and observers, the followers who then were yet to come, art and science unfurling ever forward in time.

Why does John point to himself, then upward?  This expresses the forerunner nature of his being and role in biblical narrative.  Yet there is something so direct about John’s gaze that Leonardo’s own gaze can, arguably, be sensed.  And in a strictly literal sense, is the gaze not indisputably Leonardo’s own?

It is in perfect keeping with the principle of Esperienza and the temporal processes of all art, science, and Nature for Leonardo to remind us as if in his final image: “I am me, and mortal, and though you are like me you come after, and when I am no longer.”  The starkness of this truth – and of all that depends upon it – rings true to Leonardo’s final spoken words apologizing to humanity: “my work did not reach the quality it should have.”

It's difficult to perceive optimism in the Saint John, but Dante’s return from the afterlife can provide a hint.  The poet traveled to the end of time, but then returned to resume his place within it.  He still has life left, and the added balance of a will and desire which revolve in harmony with the "love that moves" the cosmos.  If Leonardo is paralleling John the Baptist with the younger apostle John, Dante’s imagery of light and shadow may pertain from Paradiso XXVI: "light will startle [one] from sleep.... confused by what [one] sees."  In any case, Virgil as forerunner to Dante aligns with Leonardo’s own self-orientation toward the artists and scientists of today.

To the garment of technological and built environment it has been humanity’s legacy to weave, Leonardo contrasts the saint’s – and perhaps his own – state of hardship and exposure to “the wilderness" of fluctuating circumstance.

Leonardo’s final painting reminds us to not just predict or theorize the positive outcomes available to modern science and technology but bring them to fruition.  His great legacy is to show how fundamental art, poetry, and the imagination -- the active life of intellect in all its forms and nuances -- are to the process of sustainability becoming real.

Next blog, March 2022:  Leonardo, Machiavelli, and the politics of sustainability