The Mindful Mona Lisa: Pointing Us Back to Mindfulness 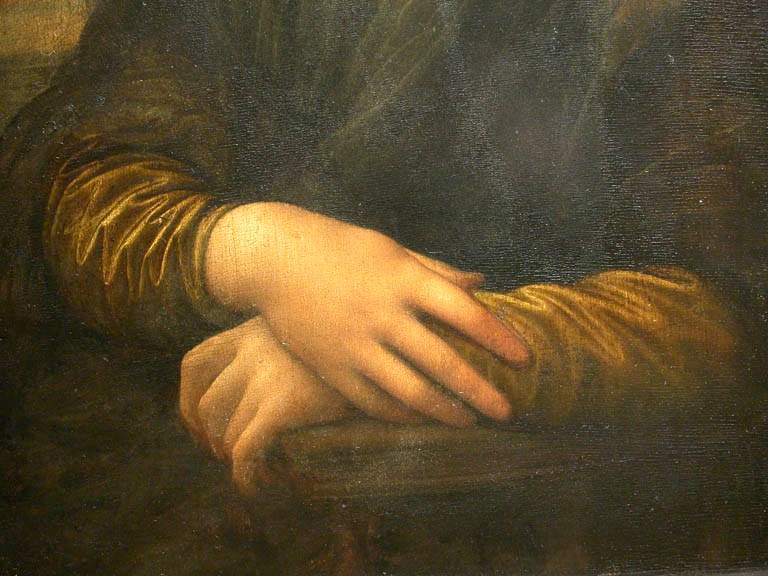 One definition is “non-judging awareness of present-moment experience.”

Another interesting definition by neurologist James Austin is “remindfulness.”  Just as remembering implies a putting-back-together of what has been fragmented, mindfulness has something to do with allowing the mind to re-integrate itself anew and re-balance to baseline.  Sleep is essential to this restorative process, but waking states (such as activation of the default mode network) are also necessary.

In Zen tradition, reminders like birdsong support the practice of mindfulness by returning our attention to waking contemplation.   Another form of Buddhist practice, the koan, is sometimes said to be “a finger pointing to the moon.”

The role of mindfulness in neuroscience, and hence in art, literature, and all human networks, may prove to be the most important story of the 21st century.

If mindfulness is fundamental to brain function, perhaps art has less to do with objects and more with something like "our experience of ourselves, our relationships, and the world when enhanced toward its healthiest possible state by the full practice of integrative mindfulness."  What if aesthetic experience is in the brain of the beholder, which must be shaped by mindfulness in order to perceive true beauty?  Artworks then function best as guides and pointers, rather than vessels of content we consume.

The Mona Lisa engages with mindfulness on many levels.  We see the painting best when we are in a mindful state.  The sitter herself is represented in a mindful state, an imagined embodiment of "experientia" (which Leonardo called his guide and teacher, stating he would "in every case, give her as evidence").  Still further, the painting portrays in compact form all that Leonardo discovered and created by making mindful experience his guide: his knowledge of geology, hydrology, engineering, painting, optics, and astronomy; visual truth, beauty, and communication; psychology, society, and history; indeed humanity’s very ability to learn and improve itself.  We are shown all this through an embodied aesthetic experience -- as with indigenous or Buddhist practice -- not by analytical description.

Earlier this week while considering the hands, it struck me that the right hand may be pointing ever-so-subtly to the left sleeve.  Several Leonardo paintings include pointing hands more or less prominently.  The hypothesis that the Mona Lisa is pointing, however, is a brand new one that could profoundly alter how we interpret the work.

Why point to the left sleeve?  I’ve suggested previously that this portion of the image may represent a grafted braid or vortex like the shawl and neckline embroidery.  Pointing to it says: “What you think you have seen isn’t enough.  I’m pointing to these folds of fabric that enclose the left arm of the sitter.”  Their meaning could be multiple: fabric, interwovenness, torus, folds; intersection and rotation in space; or even the point at which art and artist meet, passive and active, yin and yang, past and future.

Such a synaptic clinamen would echo the classic admonition “temet nosce,” or could even (to indulge a flight of poetic fancy) portray a finger-touch akin to the contemporaneous masterwork by Leonardo’s lifelong peer and rival: the Sistine Chapel.

Next week: imagination and mindfulness