The Mindful Mona Lisa: Allegory and the Transverse Fabric of Narrative 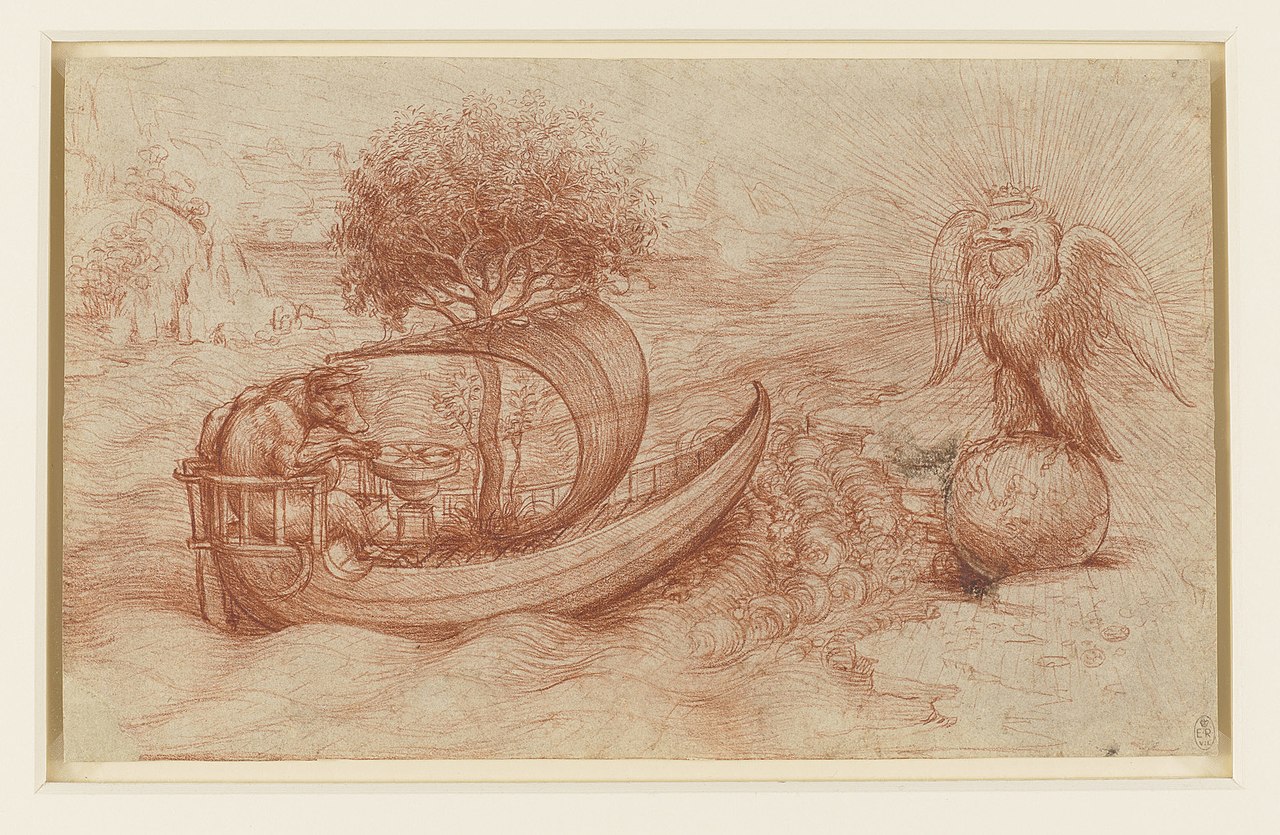 The rather odd, yet highly finished, Allegory with Dog and Eagle is one of Leonardo’s latest and most enigmatic works.  It is often interpreted (as in Panel 48 of Aby Warburg’s fascinating Mnemosyne Atlas) as a reflection on the theme of the Roman deity Fortuna or Fortune.

Since the eagle and boat are close copies of Botticelli’s illustrations of Purgatorio IX and II-III, respectively, it makes sense to consider Dante’s reflections on Fortune’s role in human events as a possible influence on Leonardo’s intended design of the work.

The rudder and ship’s wheel were standard symbols of Fortuna in medieval and Renaissance eras, but in this drawing it is a faithful canine that steers and a compass rather than a random wheel of chance (such as Durer's) that guides.  These changes are uniquely Leonardo’s, and may reflect a developing belief at the start of the modern age that while chance is always a factor human efforts can shape the future.

The tree as mast is often featured in medieval images of the “Ship of Fools.”  It can represent many things: the Tree of Estates that supports the social classes of nobility, peasantry, etc., the flourishing or withering of institutions or individuals (as in Purgatorio XXXII-XXXIII), or even longevity and knowledge as such.  Since the compass is fixed by a perfect beam to the eagle, which often represents political justice and stability, it is plausible to see references to Leonardo’s need to leave Italy in his final years to seek safety in the French court.

Since the work is untitled, and never explained by Leonardo, one can imagine it being an allegorical communication to Francis I of what sanctuary meant for the artist-scientist, and perhaps most importantly, for the legacy and future of his complete oeuvre (much of which, including the Mona Lisa, would belong at Leonardo’s death to the French nation).

In this reading the tree could represent Leonardo’s wish to “transplant” his lofty goals, humbly of course, out of the civil strife which left him insecure in his home country.  It was exactly such a transfer of science, art, and cultural prestige which Francis I sought in his offer of refuge to Leonardo, in hopes of nurturing similar achievements in France.  The drawing would have made a fine gift of thanks for Leonardo to present to his new host on arrival (or a compelling request to be sent in secrecy).

Thus we see a complex layering and interweaving of messages here: Leonardo’s appreciation of Francis I’s patronage, his view of the legacy of his work, and even a self-image of canine diligence as opposed to either random chance or leonine triumph.  The references to Dante add many additional threads, including the Exodus narrative of flight from servitude.

Yet we can also see a poignant, highly personal meditation on hope and perseverance being expressed by Leonardo as he imagined the final phase of his career.  How he viewed – and wanted posterity to view -- his life as an artist and scientist subject to continual chance and change, the contrast of patient effort with lofty visions of progress, and the care he felt for an enterprise of which he was only a temporary steward all combine in a single image of great complexity, depth, and beauty.

Next blog:  translation and transformation