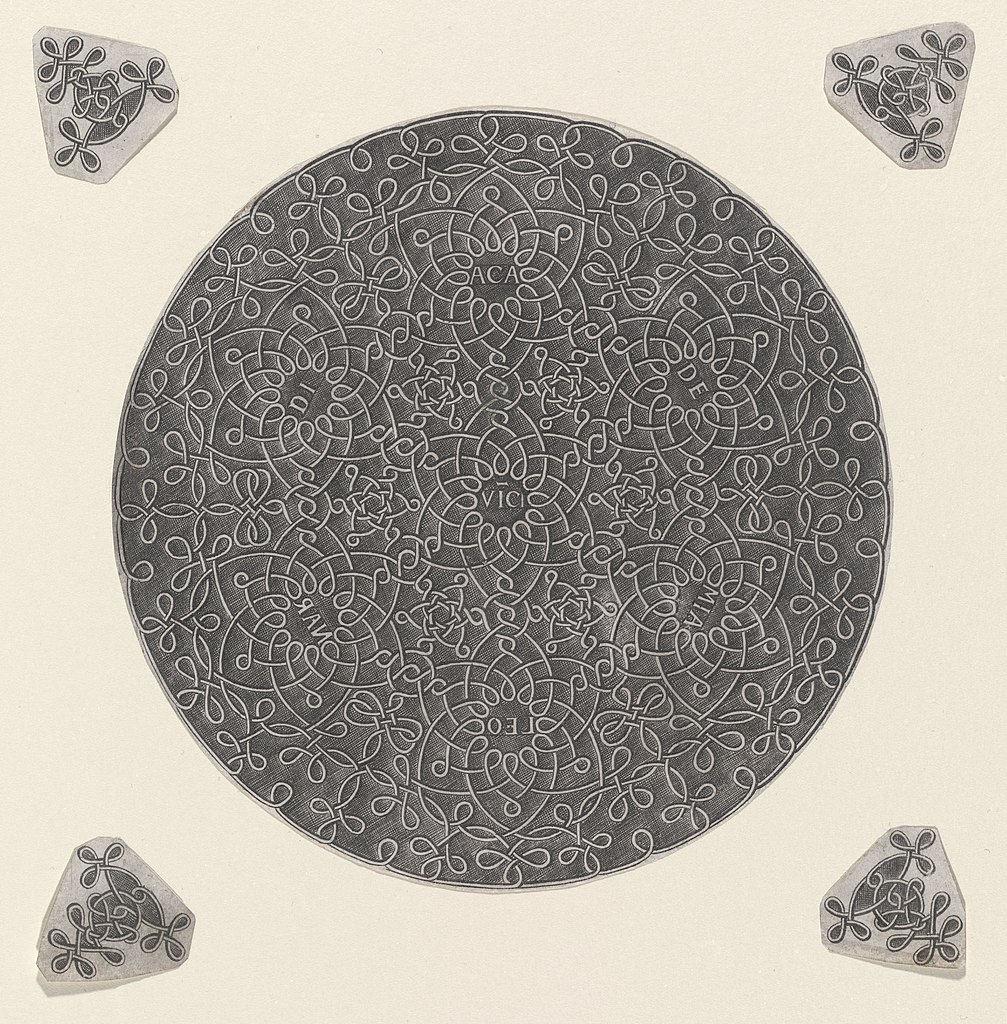 Leonardo made a number of knot images for his own "academy."  Many read "Academia Leonardi," with the word "VICI" at the center, which means "won" in Latin and is a pun on his surname "Vinci," which means "win" in Italian and "worsted yarn" in Latin.

The knot images are statements of accomplishment, not just to say “I have founded a school” (which was not literally the case) but also “I have prevailed.”  His letters and writings are full of questioning whether he can achieve his goals and succeed in both the projects he has undertaken and the greater historical impact of his oeuvre.  He was not without uncertainty and tribulation on both counts, but at times clearly felt he had expressed what he wanted to “well enough” and overcome obstacles to create something worthwhile.

In this sense, the knot image represents both consistency, that is, continuous integrity t­hrough time, and resilient endurance.  Consistency is about having lived up to a standard he set for himself, and resilience means having adapted to and overcome adversarial forces and events.  Both virtue and survival, wholeness and history, are symbolized in the complexity and stability of the knot.

By chance this past week I was reading the novel Less in which the main character loses a ring.  The plot seemed to be structured around numerous “pair” images, echoing Homer’s Odyssey, with frequent puns and puzzles, so I did an internet search for “meaning of lost ring in literature” to find references beyond those I could recall: Herodotus’ story of the lost ring found inside a fish; Charlemagne’s ring as described by Calvino in his essay on “Quickness;” Tolkien of course; and the Nibelungen.

The search however found something I had never heard of before: “chiastic structure,” also called “ring structure.”  Although not the type of ring I was searching for, it nonetheless proved to be the very form on which the novel is based!

Its constitutive pattern is called “chiasmus” or A-B-B’-A’, common in ancient texts like the Odyssey and Ovid’s Metamorphoses, in which the text makes an “x” (or “chi”) shape and “circles back” to where it began.  This pattern was both an aid to the recitation from memory of epic poetry and an aesthetic emphasis on cycle, crossings, and nested recursion in narrative.  It can occur at various levels, such as a phrase, sentence, section of text, or the full work itself.

Chiasmus is less associated with visual compositions, but is an anatomical principle -- Leonardo co-located the sensus communis, center of the human spirit, with the optic chiasm -- and may prove relevant to Leonardo’s work if future investigation can establish consistent patterns (such as hand gestures indicating intersections, bridge-river crossings, bi-diagonal composition, etc.).  The sites where chromatids meet and exchange genetic material in meiosis are called "chiasmata," which can be compared to the diverse paths of ordinary genius by which humans express ourselves in the network neuroscience model of intelligence.

Wherever it may eventually lead, the strange serendipity of this chance finding seems a fitting metaphor with which to bring to a close the first six months of this blog, and to, in this last installment before the upcoming election, voice my hope that the world will emerge more unified, reconciled, healed, and positive in its course as we set forth anew to face with all the abilities we have the challenges of climate change, Covid-19, and economic inequality.