The Mindful Mona Lisa: What's in a Name? 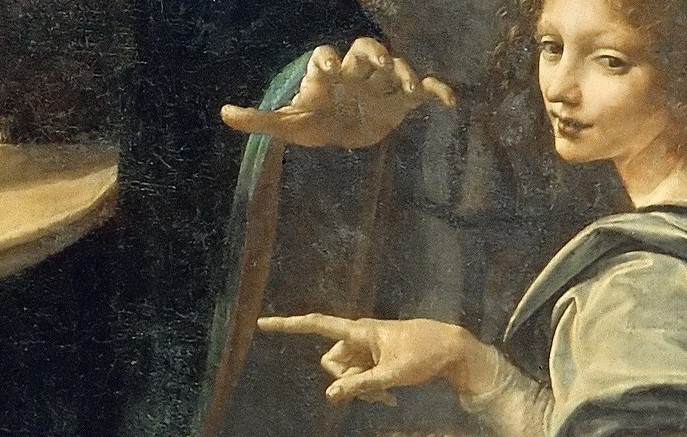 In Dante’s Convivio he correlates the ten celestial spheres with the ten sciences or “intelligences,” the seven liberal arts plus physics/metaphysics, ethics, and theology.

Could Leonardo’s “universal picture” the Mona Lisa, informed by his own principles of art and science, contain a parallel cosmology of knowledge?  He wrote, in contrast to Dante’s geocentric model, that "The earth is not in the centre of the Sun's orbit nor at the centre of the universe, but in the centre of its companion elements, and united with them."

Heliocentrism would remain illegal for well over a century after Leonardo's death in 1519, so we should not expect him to have published the above in blunt terms.  He documented his research quietly, subtly, even “artfully.”  Interestingly, he does not say "the earth revolves around the sun" but rather locates center among all "companion elements" in a state "united with them."  In this view the center is nowhere, but also everywhere, dispersed throughout the web of all phenomena not empty, null, or grid space.

How could one depict such a cosmos devoid of center?

In the Mona Lisa all center is perpetually relative and in motion.  The model is not of concentric circles, but something like the swirling patterns formed by a drop of ink added to clear water.  The dominant linear perspective of The Last Supper has been abbreviated to two small sections of a balcony wall, and grid is conspicuously absent from the composition.  This yields a topologically complex, universal, physical, organic, indeed perceptual form of centricity which has implications not just for the planets but all phenomena including physics, chemistry, and biology.

Interwovenness and involution pervade the image.  The helix or double-helix is the primary motif -- in either side view or cross-section -- illustrated by the winding rivers, curling hair, spiral garment, torsional posture of the sitter, and circular gesture of the arms.  Interconnection via braiding appears in the neckline embroidery and is even psychologically present in the eye contact which “entangles” the viewer's experience, memory, consciousness, and history with that of the sitter and the artist, creating something akin to a quantum experimental apparatus.

Perhaps most importantly, there is no outside view of this cosmology: we can only see or describe it from within it.

Naming is fundamental to identification, equivalence, and category, establishing both relationship and location within the latticework of all names.  It is also gestural: as Beckett wrote, "In its first... form, language was gesture.... to say 'sea', [we] pointed to the sea."  Name can rapidly shift from one configuration to another, just as network or neural flows can reroute abruptly when an element’s function changes.

Assigning the name Esperienza to the ur-portrait of modernity unites the actor and the acted-upon symbiotically, in both humanity and in our multifarious interconnections with reality through time, designating Esperienza as our guide -- like Beatrice -- to the cosmos.

Full understanding of humanity and technology can only be obtained through this principle, but unfortunately we still insist upon seeing instead a smiling gaze of not actual but only potential meaning.  (This is of course better than nothing, and part of the work's slow-acting design).  Such myopia reassures our grid-making efforts but leaves too much inner and outer reality null, void, and unable to adapt.

Naming this deficiency is half the battle and may be the role which Leonardo engineered his apparatus to elicit in the service of planetary sustainability -- that is, balance among humans, nature, and all spheres of art and science.

Next blog: the first sphere