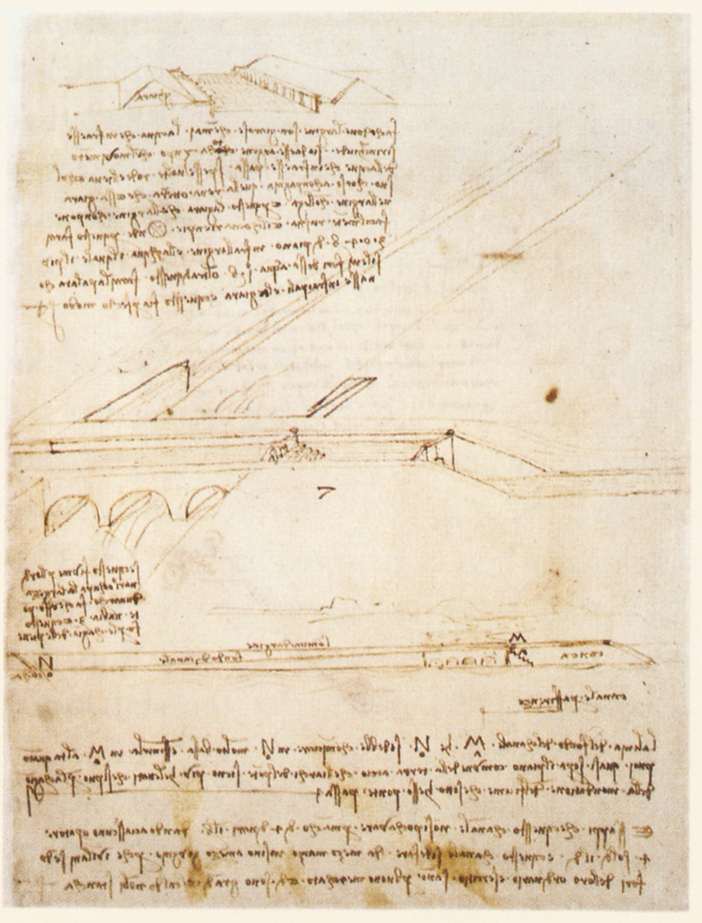 [This is the fifth in a series of blogs about “The Mindful Mona Lisa.”]

Reading Leonardo's notebooks this past week I found a very interesting drawing of a canal-bridge, a design like an aqueduct built to carry boats not just water over a bridge.  It was part of Leonardo’s work on a massive engineering project assigned to him by the Medici rulers of Florence to divert the course of the Arno river to connect directly to the sea, bypassing the rival city of Pisa.

Carlo Starnazzi describes this as a “grandiose plan to realize…at the confluence of the Main Channel into the Arno and at a very short distance from the Bridge of Buriano, subsequently consecrated for its symbolic valence in the background of the Mona Lisa and of the Virgin with the Yarn Winder, a work of high engineering: a bridge-channel, that might … put in communication the two water courses….”  [Carlo Starnazzi, Leonardo from Tuscany to the Loire, p. 24, 2008.]

If the bridge in the Mona Lisa is a reference to the bridge-channel drawings from the notebooks it would support the idea that it is meant to "flow" into the water-vortex shape of the sitter’s shawl, substantiating a key element of the bridge-garment-experience hypothesis.  The Mona Lisa's right hand and left sleeve also echo this kind of blending of like spiral forms, with the curve of the fingers leading into the curves of the fabric like a graft or braid.

Starnazzi interprets the sketch of a series of inverted arches in Leonardo’s drawing "Schematic of the City of Florence," Windsor, RL 12681,  as a reference to the bridge at Buriano (ibid, p. 69).  Yet something else intrigued me as much the question of whether Leonardo intended to depict any specific bridge:  why does the RL 12681 detail have so many more arches than the bridge in the Mona Lisa?

Visually the RL 12681 detail called to mind a linear half cross section of a spiral tube or cochlear form.  Starnazzi mentions other examples of cochlear motion and forms including "Archimedes' Screws" from the Codex Atlanticus f. 26, "Examples of Cochlear Motion" from Ms E, f. 42 (ibid., p. 27), and drawings of the trajectory of wind from Ms. E f. 40 (ibid pp. 199-200).  Each of these forms somewhat resembles the RL 12681.  Of course this similarity is speculative, as well as geometrically inexact, and must be considered a guess at best if not a red herring.  Perhaps the RL 12681 detail is just a typical many-arched aqueduct form, or something else entirely.

In any case, if the bridge in the Mona Lisa is meant to evoke the design of a canal-bridge, aqueduct, or cross-section of a cochlear form it would offer plausible context for Leonardo to have intended a compositional and thematic purpose for the bridge, as a visual element of the painting’s structure and a reference to ideas from the notebooks, beyond being just a picturesque landscape detail.

Next week: category theory, analogy, and the nature of consciousness