A little bit of noise | Leonardo/ISAST
Skip to main content

A little bit of noise 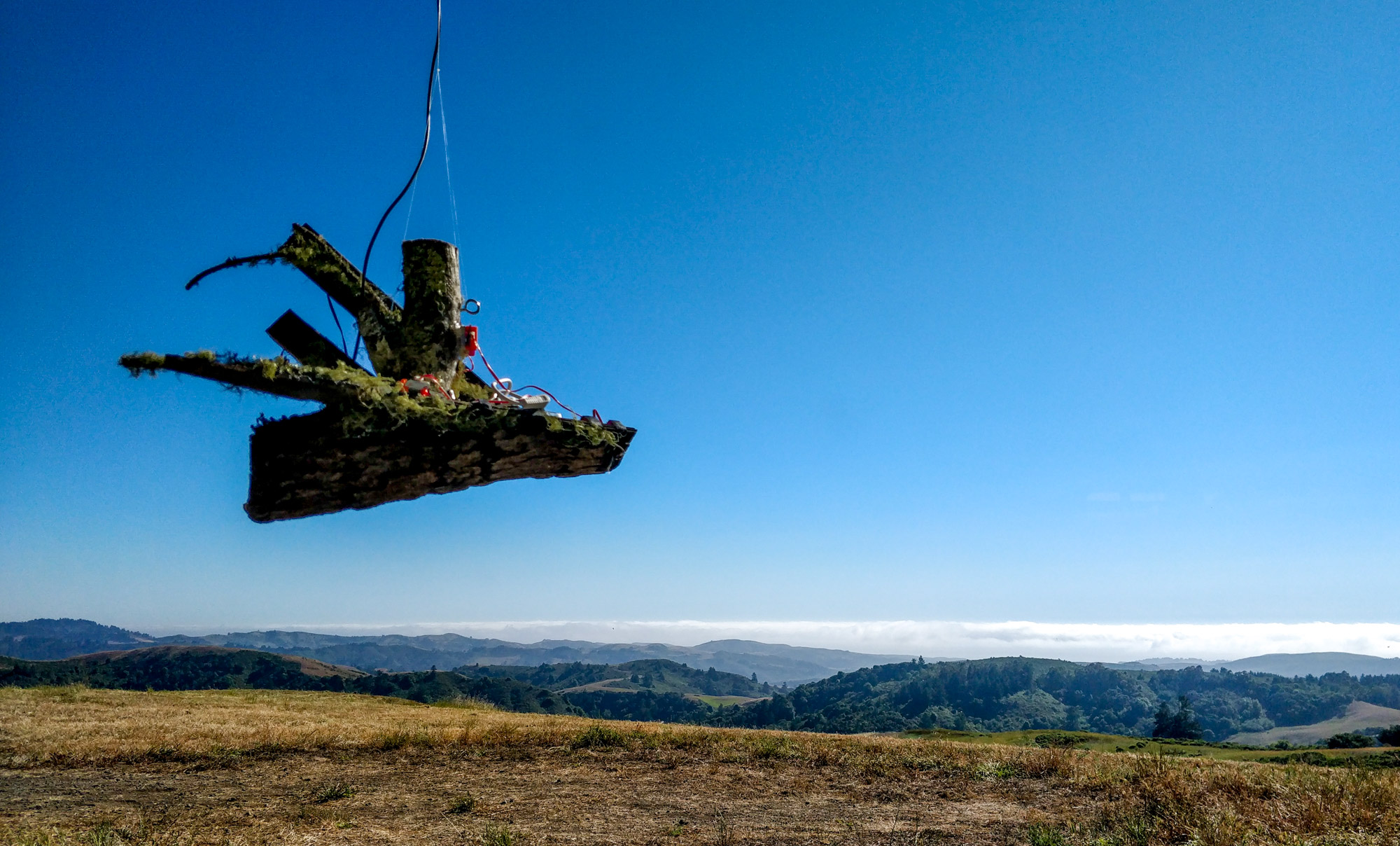 Summary: Using the Little Bits Korg Synth Kits and sensor elements, Weidong Yang and I constructed an installation entitled A little bit of noise and protyped a system for sonifying Electromyography (EMG) signals, which I later realized as a Max patch; this EMG + sonification patch will be used in future performances by Daiane Lopes da Silva.

The most fulfilling aspect of this residency was the opportunity for interdisciplinary collaborations, especially as I was the only sound artist/composer in the Scientific Delirium Madness. So I have decided to blog principally about collaborative projects and exchanges with other artists.

My collaboration with Weidong Yang began with some after-dinner play. I had originally acquired the Korg Little Bits Synth kit for public workshops which I was involved in organizing where I taught until last year, at Goldsmiths, University of London, often in association with Women in Sound/Women on Sound. Then this year I integrated them into one of my classes at Stanford, as a means of introducing principles of sound synthesis to a mixed group of students, including majors in our Computer-Based Music degree at CCRMA (Center for Computer Research in Music and Acoustics) and students in other departuments. So just at the last moment before leaving for Djerassi, I thought to bring them along to make some music together after dinner.

Weidong enjoyed the Little Bits so much that he decided to get his own kit for a workshop at Kinetech Arts, and we also decided to get some sensors from other kits to experiment with together.

In the meantime, Weidong noticed that there was a particular resonance to the area just outside the Barn, due to reflections from the glass, the concrete border and the overhang. And so, the suspended interactive installation A little bit of Noise was born, and presented at the Open House. We tried some different sensors, and decided to suspend the piece right in the middle of this particularly resonant area and track its swinging motion with an accelerometer. We added a proximity sensor as well so that people would realize that they could change the sound as they approached it. With the two sets, I was able to create a somewhat complex multi-channel circuit, using two sequencers to produce fairly rich and varied continuous sound which nonetheless clearly manifested changes in the data from the two sensors.

I had at first thought to create a resonant box to embed transducers in, but then Wei suggested that we use natural found materials to blend the installation into the environment. So the circuits were mounted on a hollowed log we found, with some additional firewood supporting each "branch" of the circuit so that each processing chain was visually coherent, and the buttons and dails accessible to be played (see assembly photo below). There was already some lichen on the wood we used, so I added some of the local old man's beard for decoration (and to hide the hot-glued junctures). We used the suspension cord to support the audio connection leading up to a wireless amplifier and speakers hidden underneath th Barn awning.

It was fascinating to see people's reactions to the installation. Some enjoyed swinging and spinning it or moving in relation to it in order to change the sound; while others engaged in more detail with the dails of the circuits to create their own preferred sounds, beats and sequences, while using the sensors for added expressivity. It was great to have the chance to show the work to so many people in order to get this input (much of it which we were able to film). Some interacted with it in unusual ways - see Daiane Lopez da Silva's performance with her hair below. It was also interesting to pass from the resonance of a little bit of noise just outside of the Barn into the Composers Studio, where another installation was playing (which you can read more about in my next blog post, entitled The Piano's Blue Heart). 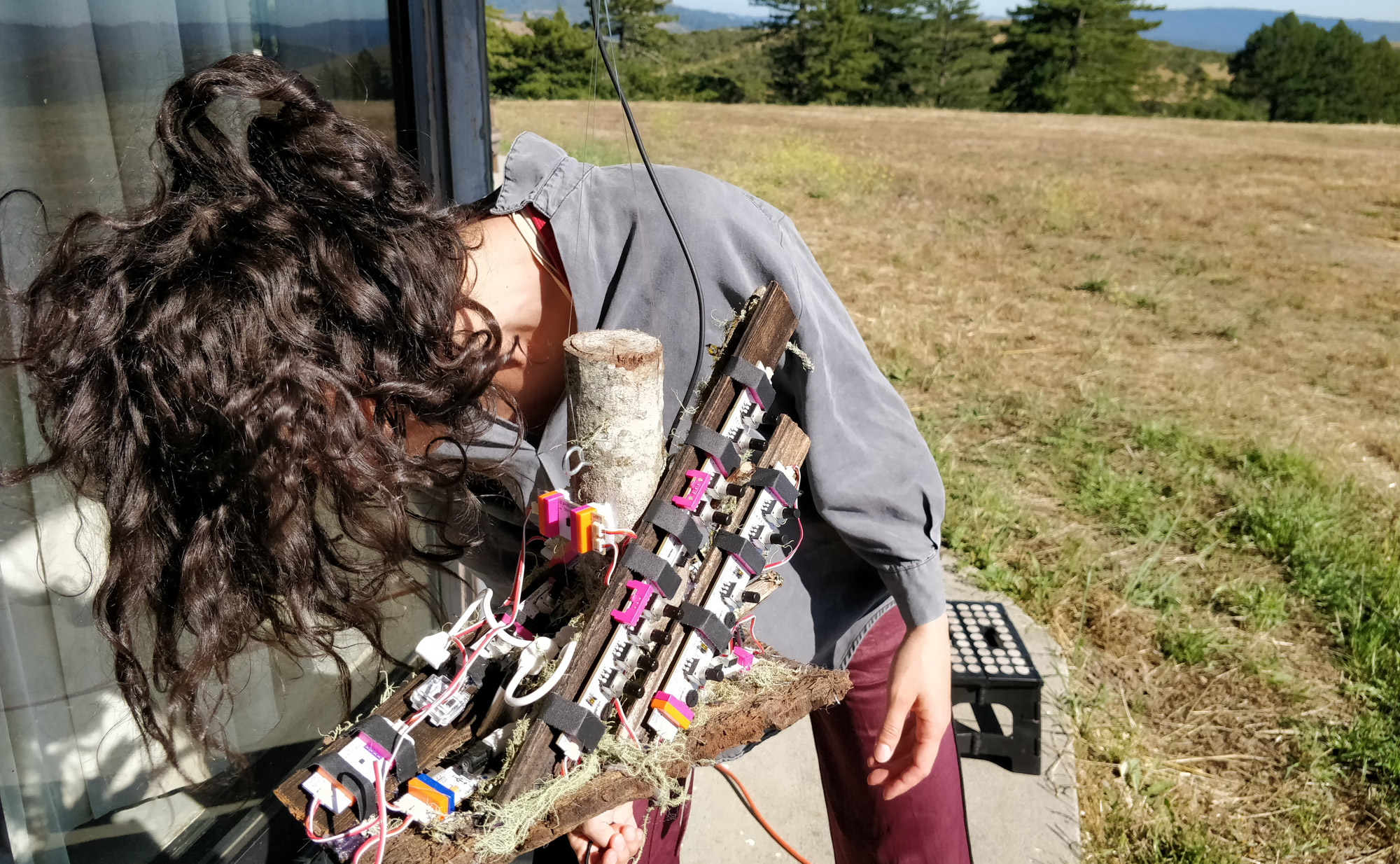 The most special thing about this installation is perhaps its transitory nature: once the Open House was behind us, The Little Bits were put to other uses, and the wood returned to the woodpile.

Now we had a common language and tools to create a sonification system. Weidong and Daiane had given a brief demo of an EMG system, and now Weidong wanted to make it more sophisticated: to remove the noise floor, and find some interesting sounds. We made some circuits connected to the EMG sensor output, and decided that the most interesting sounds were some modulated noise. So now I had a "recipe" to imitate with a Max patch, and after a few instantiations and suggested changes from Weidong, I came up with a system which was a nice combination of noise and harmonic qualities.