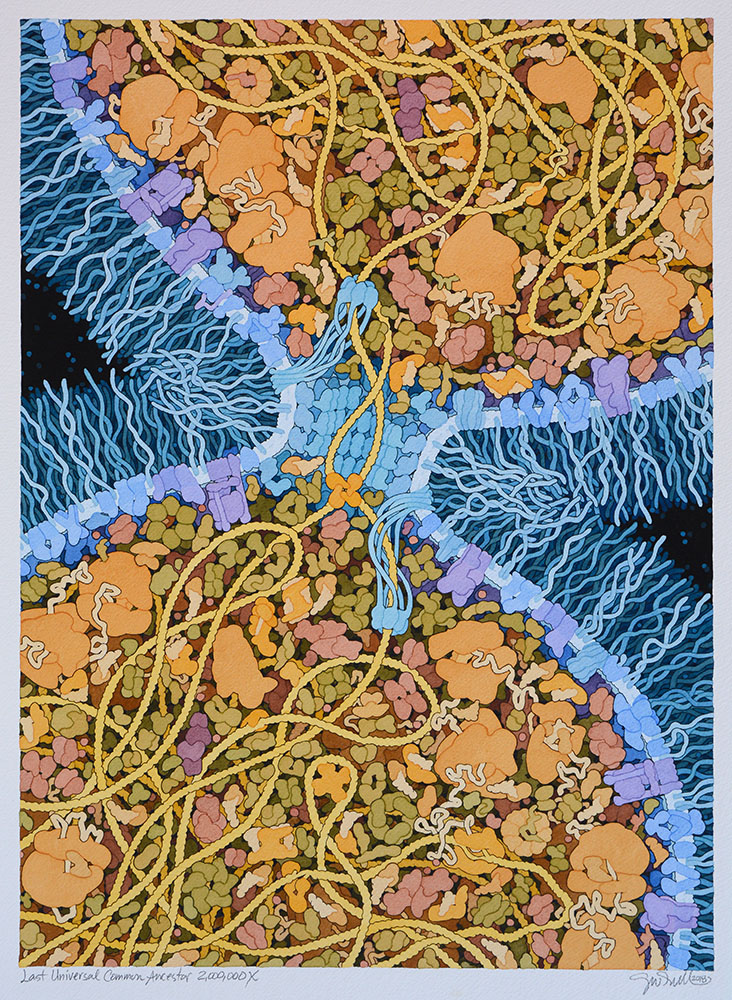 I find myself constantly doing fractions. Last Wednesday was a week—one quarter of my residency at the Djerassi Ranch. Today is the 10 day mark—one third. I’m determined that as of today, after this post, I’ll stop this way of thought.

For the first part of my time here, I’ve been working on a painting of LUCA: the Last Universal Common Ancestor. I’m lucky to have been given a beautiful studio filled with natural light, perfect for the type of watercolor work that I do. Two large double doors open onto the common space of the barn, and the studio is right next to the kitchen, so I have the added benefit of experiencing the constant hum of activity from the other residents. As I’ve worked on this painting, I’ve heard the sounds of piano, charango, and some less definable instruments. I’ve caught wisps of the writers sharing ideas. I’ve heard wood being shaped and clay being fired out in the shop. In sum, a perfect environment for creating.

As I was planning for this residency, I decided to explore the origin of life. In the past ten years or so, scientists have pieced together a convincing scenario built around the chemistry and geology of hydrothermal vents. This first painting picks up the story a bit later, when the basic mechanisms of cellular life had evolved and one particular population of cells was so successful that it dominated and ultimately gave rise to all the life we see today. I have shown this primordial cell in the process of dividing. To me, this seems like the primary evolutionary innovation that may have given these cells the advantage: the ability to divide faithfully and consistently, such that both daughter cells have the proper complement of genetic information and molecular machinery.

I’m planning to do a second painting exploring abiogenesis (diving into all that chemistry and almost-biology in the hydrothermal vents), and if I have time, one exploring the genesis of higher cells. But this place, and the combined creativity of the residents, has a way of pulling you away from plans and into exploration. I’m looking forward to seeing what the next two-thirds has in store.