Art and the Unknown at the Ends of the World

When the world ended, in April 1784, the shrapnel spread far and wide. I shouldn’t have been surprised to find a piece, a BIG piece, had landed on the Djerassi property, but I was. It weighed many tons and its impact had knocked down every redwood tree for miles along Harrington Creek.

But that was a hundred years ago. The redwoods that had gone to pieces in the event had been replaced by new growth from the stumps, huge trees now in their own right. The shrapnel piece, meanwhile, had lost all its sharpness and threat and now looked lost and a little forlorn. 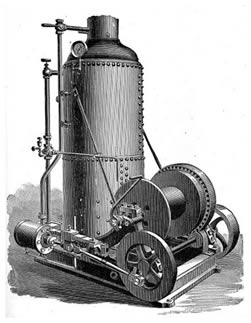 That “bit of shrapnel” is an old steam boiler, left over from when a logging operation came to Harrington Creek to cut down its big redwoods. The steam engine fired by this boiler was the key to the whole operation, supplying the raw power to move the felled trees down the canyon to the wagons that then hauled them to the mill. According to philosopher Timothy Morton and others, this turned out to be the power to end the world as we know it; multiplied a million times, it precipitated the onset of humanity as a geophysical force on a planetary scale.

The world ended again at Djerassi in July 2017, but in a different way. The fog had come in right up to the Artist’s Barn, seemingly placing us all right on the edge of the end of the world. To the artists and scientists doing a residency there, all the usual landmarks had disappeared.  The way forward was unclear.

Katharine shows us a video: she delicately crosses the rough ground on top of a hill in toeshoes. She explains she is dancing the future. In the video, she is small but erect in the immense blue of the sky. Beyond her, the land falls away into primordial cloud that stretches to the horizon. It felt, she tells us, “as if I was dancing at the very edge of the world.”

Why is it, I wonder, we find ourselves beheld in wonder at the fog, and not the boiler? We tramp right by the boiler, heedless, eager to see at the artworks nearby.

My work at Djerassi calls me to contemplate the grand forces that determine our planet’s history, and to think in longer time scales. For me, finding the boiler deep in the woods was an uncanny moment, a brief interval when the curves of time straighten out and, like with the cars on the subway, for an instant you can look backward and forward and see the whole train.

The same alien logic that thought these redwoods were worth more dead than alive has moved on from this place, and grown ever more powerful. Now its pen is writing off the permafrost layer as collateral damage, and the rainforests, and the Great Barrier Reef.

Meanwhile, back at the Djerassi property, the redwoods drink in the fog, which has now rolled in over the Artist’s Barn, and water drips as a slow, deliberate rain off the needles of the knobby pines. Up in the Artist’s House, Gina is showing us her pictures of the last pangolins and the motorized canoes that will meet the barges that will meet the trucks that will meet the planes that will take them, via that alien logic, to other continents to be eaten. The pangolins, she notes, are delicious, but that is incidental. The end of the world has moved again, and now we are enveloped in it.