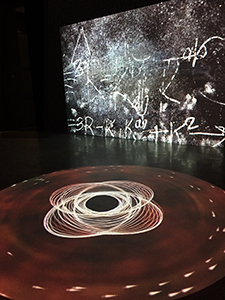 The exhibition “Uncertainty,” October – February 2017, curated by Stephen Nowlin at the ArtCenter College of Design in Pasadena, California, is a precisely and economically curated collection of art/science works that interrogate the concept of ‘knowing.’

Each exhibit is carefully configured to clearly make visible the ideas of each participant: a wall sized video projection at the entrance of the exhibition by Thomas McCauley of a representation of the Higgs Boson collision event; four large paintings that are sublime symbolic representations of biological energy systems and notebooks of the art/mathematics team Owen Schuh/Satyan Devadoss that produced them; Donald A. Glaser’s stunning photographs of bubble chambers revealing the path of sub-atomic particles (which yielded him a Nobel prize at the age of 34) and his notebooks; a room filled with Richard Feynman’s symbolic language for sub-atomic particles as manifested as sculpture elements and a processed photograph by Edward Tufte; a gigantic wall work by Jonathan Corum with dozens of examples of exoplanets as revealed by the Kepler Space Telescope; fascinating works by Jim Campbell which explore the boundary between information and noise for human beings; the marvelous floor and wall projections reflecting the mathematics and imagined morphing of black holes done by The Einstein Collective, Sarah Mast, Jessica Jellison, Christopher O’Leary, Cindy Stillwell, Jason Bolte, Charles Kankelborg, Nico Yunes, Joey Shapiro Key; Lia Halloran’s magnificent drawing and photographic transformations of the renderings of the eighteenth century French astronomer Charles Messier; and a marvelous wunderkammern by artist Marc Fichou in which scientific and spiritual forms from diverse cultures throughout time are assembled on large boards adjacent to desks filled with working papers suggesting the creative process itself. In front of ArtCenter College of Design is the van on which Feynman painted some of the symbols he invented of sub atomic particles reflecting his playfulness and delight in connecting ideas from theoretic physics with the temporal world.

The floor plan of the exhibition itself is a quasi labyrinth fluidly leading the viewer from one space to the next, inviting an intuitive experience of discovery.  The works of each artist are carefully juxtaposed to maximize their differences in terms of the macro and micro of time and space. For instance, a room filled with Tufte’s representation of Feynman’s language symbolizing the microcosm of sub-atomic particles is next to a room with a huge wall filled with the macrocosmic images of Jonathan Corum. This juxtaposition invites the viewer to rapidly experience these micro and macro landscapes and in the process move beyond the linear and expand into the grandeur that these imagined worlds suggest.

The exhibition does seem to be about the quest for knowing itself. The first work inside the catalogue is a montage made from images by each person in the show that becomes solid black in the center, the one pigment color made of all colors in the visible spectrum, an apt metaphor for the exhibition. As Nowlin writes in his catalogue essay, “In the seeker’s world, uncertainty is not its stereotypical composite of timidity, equivocation, and threat, nor is it license to fill the void with gods leaping the gap. It’s simply where we place a temporary ‘end of road-construction’ sign on the perpetually grand and noble journey.” The essay “The Trouble with Quantum Mechanics” by Steven Weinberg published in the January 15, 2017 New York Review of Books identifies the difficulties contemporary theoretical physicists are having with the current construct of quantum mechanics, a perfect example of Nowlin’s statement. Weinberg begins his essay with the following quote: “Regarding the future of quantum mechanics, I have to echo Viola in Twelfth Night: “O time, thou must untangle this, not I.”

The exhibition suggests more questions than answers, fulfilling the curator’s concept of destabilization as a vehicle for discovery. For instance, Nowlin has assembled works by acclaimed artists and scientists and in so doing destabilizes this binary, inviting the question of what distinguishes artistic and scientific exploration.

Another question suggested by this exhibition is to what extent is scientific knowledge subjective or objective? Is everything understood about the physical world ‘a temporary ‘end of road-construction’ sign as Nowlin suggests in his essay or are there some things we know about the world that are enduring? For instance, will Sir Isaac Newton’s equations about planetary motion and gravitational force survive the test of time?

Nowlin provides limited wall explication of the works, forcing viewers to grapple with interpreting the works based on their own perceptions and cognition. Does this add to a more intuitive experience of the works or detract from enabling the viewer to comprehend the works? He does include links to additional information about each participant on the exhibition website should viewers want to learn more. 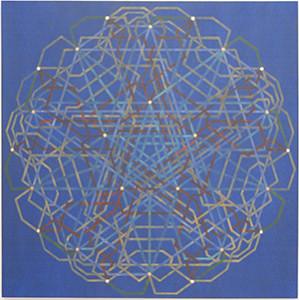 Questions specific to some of the works are: what function does the shadows in Tufte’s sculptural recreations of Feynman’s Diagrams have besides Tufte’s aesthetic addition to Feynman’s language? Why are the shadows important enough for Tufte to include their representation in a two-dimensional work of these same figures? Also, does it matter that physicists familiar with Feynman’s images read them for their scientific meaning while the rest of us see only beautiful morphing forms?

How do titles of works affect their reading? For instance, the titles of the paintings of Owen Schuh based on the mathematics of Satyan Devadoss, such as Cartography of Tree Space (Woven), suggest that they are inspired by mathematics of biomorphic phenomena. However, without these titles, these works seem to have more in common with intersecting Islamic designs or continuous Celtic patterning or even field paintings or modernist works done by artists in the 1960s. Is it relevant that these similarities are suggested when the inspiration for the Schuh/Satyan paintings come from such a different origin?

Linear understanding seems less the goal of this exhibition than an experience of the marvelous that each artist/scientist has accomplished in his/her work. In this regard, then, the show is an experience of the macro and micro and everything in between exhibited economically for maximum effect. This exhibition is a cumulative poem of possibilities for the human mind to imagine the unimaginable and an example of art/science at its very finest.

Additional information about the exhibition can be found at: