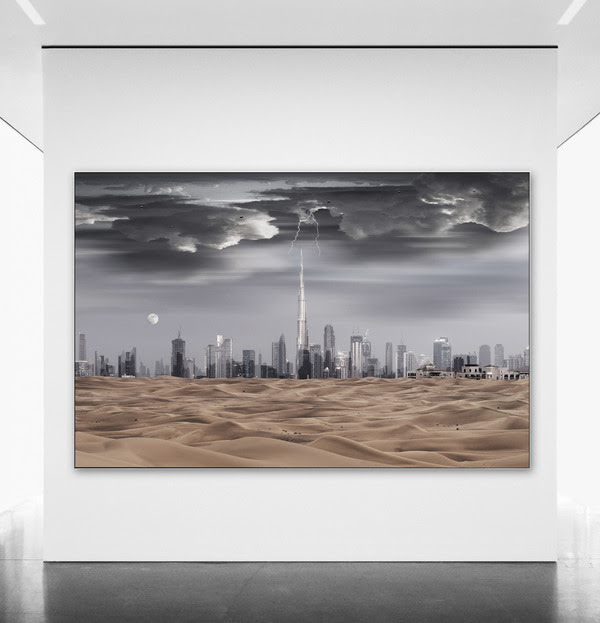 The extreme effects of climate change are now evident across the planet. Rising temperatures, heat waves, water scarcity. The desert regions of the United Arab Emirates are particularly threatened, especially in the summer months when they have to cope with great heat and enormous humidity. Temperatures between 40 and 50 degrees are now the norm, water is becoming an increasingly scarce resource, only about 70 liters of rainwater fall in Dubai per year and per square meter. To combat the heat waves, which are becoming ever stronger as a result of climate change, the Emirates, in cooperation with the University of Reading in England, have now developed a new "rain enhancement" technology to generate artificial rain using drones. These are catapulted into the air in search of clouds of the right temperature and humidity, and then emit an electric shock, a type of laser flash. The electrical charging of clouds results in cloud condensation or small water droplets being compressed into larger droplets. Once these are dense and heavy enough, they fall to earth as rain. In July 2021, the desert area in and around Dubai was hit by massive rain showers for the first time, apparently resulting from manipulated clouds.

The work "electric rainfall" visualizes the creation of artificial rain using electrical drone impulses. All over the world, innovative solutions to the extreme effects of climate change are now being researched. It remains open, however, as to what the later consequences of the manipulation of natural processes on earth could be.

In his artwork Michael Najjar takes a complex critical look at the technological forces shaping and drastically transforming the early 21st century. Najjar’s photographic and video works exemplify and draw on his interdisciplinary understanding of art. In his artistic practice he fuses art, science, and technology into visions of future social structures emerging under the impact of cutting-edge technologies.

Born in 1966 in Landau, Germany, Najjar attended the bildo Academy of Media Art in Berlin from 1988 – 1993, where he was trained in the practices of conceptual and interdisciplinary art. During this time he immersed himself in the visionary theories of media philosophers such as Vilém Flusser, Paul Virilio and Jean Baudrillard which have markedly influenced his later work.

Working in distinct series, since the mid-nineties Najjar has embraced different genres of photography using a wide range of technological approaches. He has expanded conventional ways of addressing the medium by pushing the traditional limits and reformating our understanding of photography. His work continually interrogates the relationship between reality and its representation in the technical image. His practice addresses the fundamental question of what reality means in an increasingly virtualized and simulated world. In his digital composites layers of information coexist seamlessly while indexical reference to reality is relinquished in favor of an image of its own artistic value. The monumental scale of Michael Najjar´s prints coupled with their enormous richness of detail envelops viewers, stimulating their visual senses and creating a truly immersive experience. They are a pure medium of reflection - in the double sense of the word. Michael Najjar has the fascinating ability to transform complex high-tech issues into artworks which not only address the scientific issues but also the formal and aesthetic questions inherent in the technical image.

Najjar’s work is grouped in thematic series. The variety of themes covered ranges from transformation of global megacities through compaction of information networks (“netropolis” 2003-2006), depictions of the human body transformed by biogenetic intervention (“bionic angel” 2006-2008) and virtualization of financial markets with smart algorithms (“high altitude” 2008-2010) to the future of the human species through space exploration (“outer space” since 2011). The performative aspect of his artistic practice has shifted into sharper focus since the start of his “outer space” series. In his earlier series the artist climbed to the tops of skyscrapers, and scaled Mount Aconcagua, one of the highest mountains in the world in a perilous expedition lasting several weeks; for his current space series he has now become one of Virgin Galactic´s Pioneer Astronauts and will soon be flying into space on board the privately owned SpaceShipTwo. Once more, the artist will be exposing himself to extreme experiences and testing his mental and physical limits in highly complex technical environments. Such borderline experience informs his unique photo and video artworks. Najjar uses his own body as a performance medium – the artist as space (ad)venturer.

For the past 25 years Najjar´s work has been subject of prominent solo and group shows at international institutions. Harald Szeemann exhibited his work in 2004 in ”The Beauty of Failure / The Failure of Beauty“ at the Joan Miró Foundation in Barcelona. His work formed part of the 2006 Venice Biennale's 10th International Architecture Exhibition, the 9th Havana Biennale 2006 and the 2007 Convergence Biennale Beijing. In 2008, a large-scale¬, overview was presented at the Museum for Contemporary Art GEM in The Hague. In 2011 he participated in the milestone exhibition “Atlas – How to carry the world on one´s back“, shown at the Museo Reina Sofía, the ZKM Museum for Contemporary Art and the Deichtorhallen / Phönixhallen Hamburg. In 2015 he was a selected artist at the ZKM | Globale where work from his current “outer space” series was shown in the groundbreaking exhibition “Exo-Evolution” curated by Peter Weibel. In 2017 he participated at the 7thth International Moscow Biennale curated by Yuko Hasegawa.

In 2018 and 2019 Michael Najjar was twice nominated for the world´s most prestigious photography award, the “Prix Pictet”. His work regularly features in a broad array of international publications.