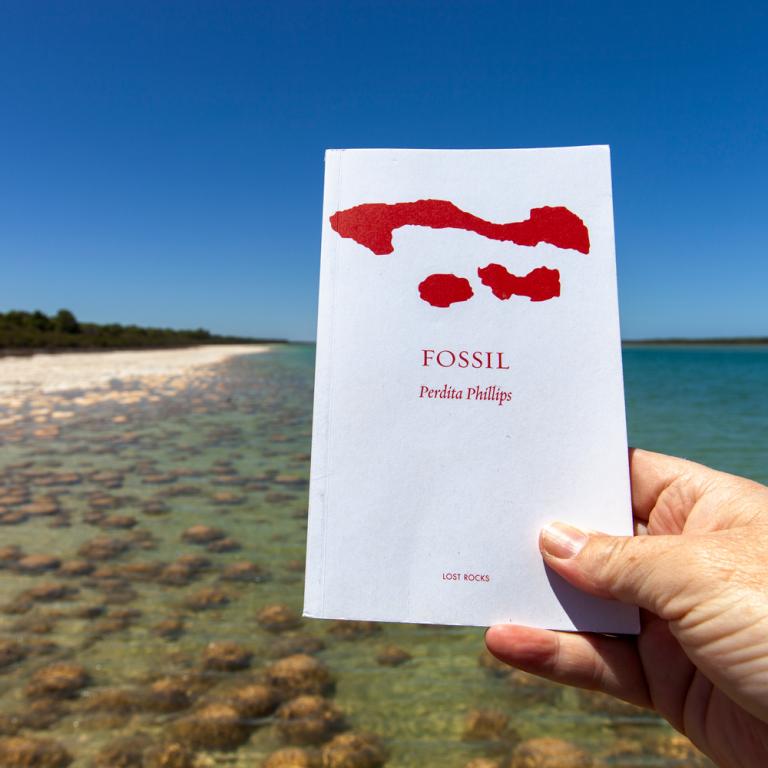 Perdita Phillips is an ecological artist based on Whadjuk Noongar Boodja in the southwest of Australia. Whilst materially diverse, underlying themes of ecological processes and commitments to a resensitisation to the physical environment are apparent. She has created sculptures, photographs, performative projects and sound and video installations since the early 1990s. Her original training was in environmental science. Phillips’ 2006 practice-based PhD, ‘fieldwork/fieldwalking’, explored the similarities and differences between walking in art and science. In 2010, fieldwork/fieldwalking was selected as the top three abstracts in Leonardo Abstracts Service Database. Her work focusses broadly on ecosystemic thinking, engaging with nonhuman worlds, deep time and creating ‘anticipatory aesthetics’ to widen the potentials in a narrowing world.

She has undertaken residencies at the Vancouver Arts Centre (‘Follow the water’, 2018-2020), including the public walking performance ‘Dealing with the runoff’, with historian Malcolm Traill and civil engineer Fred Wallefeld. Other residencies include ‘We must catch up’ (2018-2019) at The Farm Margaret River, ‘Field_Notes – Deep Time workshop,’ (2013, Finnish Society of Bioart at the University of Helsinki Kilpisjärvi Biological Station, Lapland, Finland), ‘Walking and Art’ at Banff (2007) and the Australia Council Inter Arts residencies with SymbioticA at at The University of Western Australia for ‘The Sixth Shore ‘project (2009-2010) and ‘Green, Grey or Dull Silver: art and the behavioural ecology of the Great Bowerbird, Chlamydera Nuchalis’, residency (2007-2008) and was awarded both the Artsource residencies Global City Artspace (2017, Sydney) and Basel (2003).

As founder and co-leader of Lethological Press she has edited/published ‘Birdlife ‘(2011), ‘A simple rain’ (2012) and ‘Strange Strolls’ (2005). She wrote ‘Fossil (III)’ as part of the Lost Rocks Project (A Published Event, Hobart, 2019) and co-wrote with Astrida Neimanis the essay ‘Postcards from the Underground: Walkshopping as Relationing Otherwise (2019) for the Journal of Public Pedagogies. This latter work follows on from ‘Going underground: Multispecies encounters with rocks and water in the shadow of extraction’, a 2017 collaborative walkshop Sydney-Lithgow-Sydney with Astrida Neimanis, undertaken on the Artsource Global Cities Residency. Phillips has recently undertaken a third residencies with SymbioticA on algae the drains and wetlands of Kinjarling/Albany, Western Australia.

Phillips runs community workshops on field listening and sound recording and cyanotypes. She is interested in collaborating on creative explorations of geospatial data, spatial sound and sonification and projects that combine social practice and citizen science.