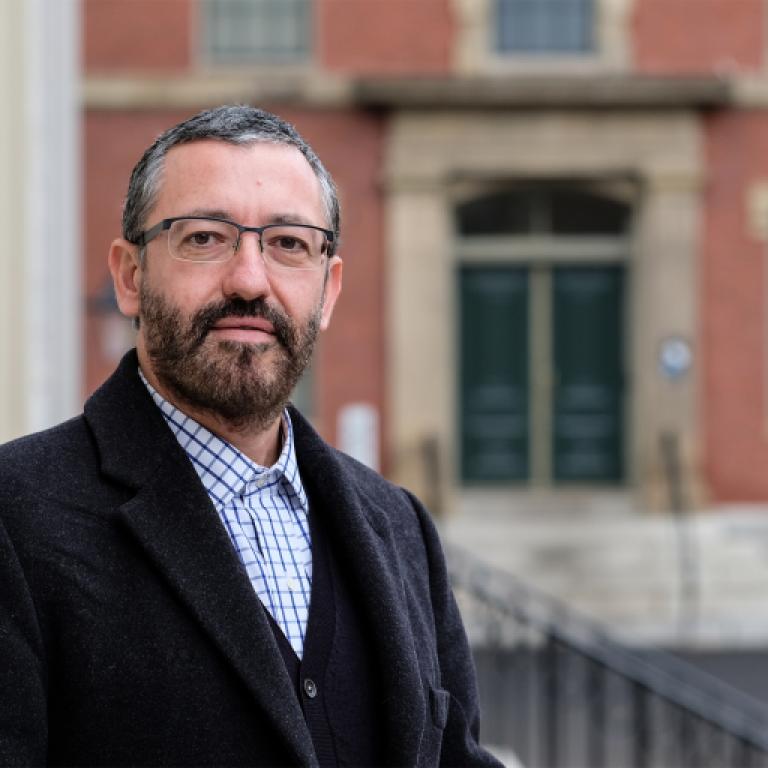 Lanfranco Aceti is known for his social activism and extensive career as an artist, curator, and academic. He is a visiting professor and research affiliate at ACT @ Massachusetts Institute of Technology and professor and director of the Arts Administration Program at Boston University. He is the founder of The Studium: Lanfranco Aceti Inc., the founder and Director of OCR (Operational and Curatorial Research in Contemporary Art, Design, Science and Technology), and founder and Director of MoCC (Museum of Contemporary Cuts). He has also founded the Media Exhibition Platform (MEP), which has operated from 2010, and has presented a range of international exhibitions both online and in physical spaces with an international curatoriate together with Christiane Paul (Whitney Museum of American Art).

As an artist Aceti has exhibited numerous personal projects including Car Park, a public performance in the UK at the John Hansard Gallery; Who The People?, an installation artwork acquired in its entirety by the Chetham’s Library and Museum in Manchester; Sowing and Reaping, installation artworks acquired in their entirety by the National Museum of Contemporary Art of Cyprus; and Hope Coming On, a site-specific choral performance he designed for the Museum of Fine Arts, Boston, with the collaboration of the Boston Children’s Chorus, and realized in front of Joseph Mallord William Turner’s Slave Ship (Slavers Throwing Overboard the Dead and Dying, Typhoon Coming On). In 2017, Aceti prepared a series of new artworks for an exhibition entitled Shimmer, curated by Irini Papadimitriou (V&A), at the Tobazi Mansion in Hydra; a new large choral performance entitled Accursed for the Thessaloniki Biennial in Greece; and Knock, Knock, Knocking a public space installation in the Mediterranean Garden Pavilion of the New Sea Waterfront of Thessaloniki. In 2018 Aceti is preparing a new series of exhibitions and performances.

As a curator Aceti worked as director of Kasa Gallery in Istanbul, where he exhibited a range of innovative artworks including 75Watts by Revital Cohen and Tuur Van Balen, acquired by MoMA, and Paolo Cirio’s Loophole4All, awarded the 2014 Golden Nica at Ars Electronica. Recently, he performed and curated Hope Coming On at the Museum of Fine Arts, Boston, as well as The Small Infinite at the John Hansard Gallery with artworks never previously exhibited from the estate of John Latham. Aceti has participated in numerous art fairs such as Art Athina, Art International, Supermarket, and Contemporary Istanbul, either as a curator or as an artist. In 2011, he curated the exhibition Uncontainable as part of the parallel events of the 12th Istanbul Biennial and exhibited artworks on the media facade of the Museum of Contemporary Art, Zagreb. In 2016 he curated a range of artworks as part of THE SOCIAL at the Museum of Fine Arts, Boston, the Boston Athenaeum, the Victoria and Albert Museum, and other public spaces in Boston and London. In 2017 he curated a new public performance by Stefanos Tsivopoulos, One Step Forward Two Steps Back, on the White House sidewalk in collaboration with the Cooper Gallery at Harvard University and Ad Nauseam for documenta14. He is currently curating Empty Pr(oe)mises for the National Museum of Contemporary Art, Athens, and other curatorial projects.

As an academic Aceti is the Editor in Chief of the Leonardo Electronic Almanac (The MIT Press, Leonardo journal), for which he has edited more than 12 volumes. He also founded in 2017 Contemporary Arts and Culture (CAC), a platform for art publications and collaborations by MIT Press and Leonardo Journal housed at MIT. He has lectured internationally at prestigious institutions such as Yale, Harvard, RCA, Goldsmiths, and Central Saint Martins.

Meanderings and Reflections on Locative Art

Not Here, Not There: An Analysis Of An International Collaboration To Survey Augmented Reality Art

Without Visible Scars: Digital Art and the Memory of War

Interference Strategies: Is Art in the Middle?

When Aesthetics Is Not Just a Pretty Picture: Paolo Cirio’s Social Actions

An Analysis of Individual Components in Larger Systems

The Global Play of Nam June Paik: The Artist That Embraced and Transformed Marshall McLuhan’s Dreams into Reality

Post-Society: Data Capture and Erasure One Click at a Time

Transmediation as Betrayal: The Case of the Leonardo Electronic Almanac

Inverse Embodiment: An Interview with Stelarc