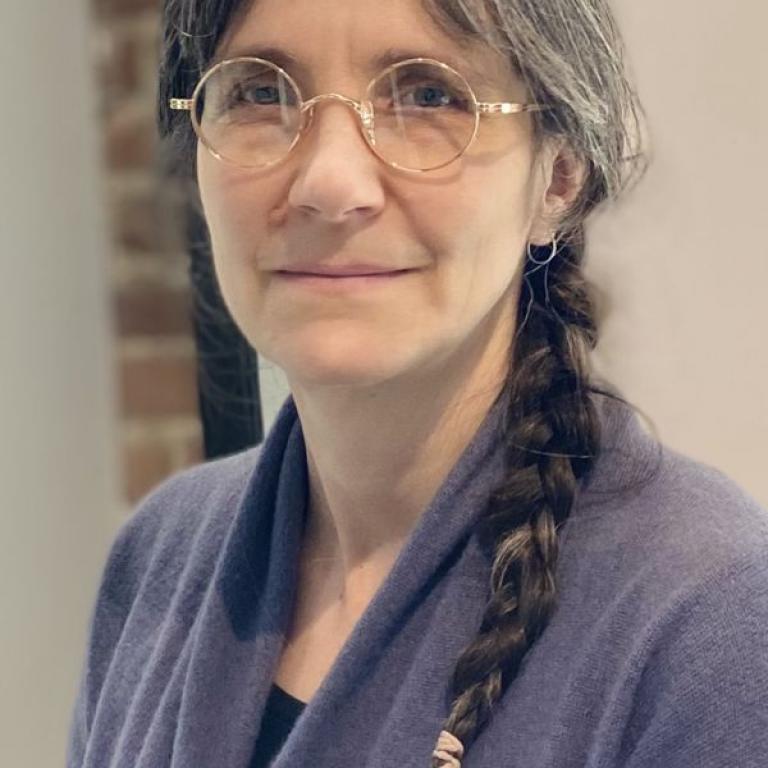 Eva Knoll is Associate Professor in the Département de mathématiques at the Université du Québec à Montréal. Her first career was in architecture (B.Sc., McGill, 1993), after which she wrote a thesis on the construction of a 3-dimensional version of a Concrete Art painting (M.Sc., Université de Montréal, 1997). This was followed by a second career as a graphic artist. She obtained a Ph.D. from Exeter University (UK) in 2008. Since 2005, she teaches how to teach mathematics, first in Nova Scotia, and since 2019 in Montréal.
Dr. Knoll researches the relationship between making art, reasoning mathematically and learning. Her research-creation approach is closely linked to her art practice, which involves a variety of media, mostly in the visual realm, with particular emphasis on craft. Current and past media include paper (making, folding, cutting, assembling), textile (weaving, braiding, basketry), painting (pen-and-ink, watercolour, acrylic, oil), sculpture (miniatures, chops, beadwork, 3D printing, laser cutting, assembling), print making (lino, gelli plate, experimental and screen printing), sometimes in combination. She also has a Certificate of Fine Arts in Textiles (NSCAD, 2017).
Her methodology focuses on the phenomenology of creation and of developing competence, with particular emphasis on their components relating to mathematics. Quantity, space and relationship concepts of interest include discrete tilings, solids and crystallography in 2 and 3D; topology, angle deficit and the Descartes and Gauss-Bonnet Theorems; number theory and number patterns; fractals and space-filling curves; Euclidean and non-Euclidean spaces, perspective drawing and anamorphoses; relating different media via mathematics. For the most part, the artwork highlights the mathematical concepts that are discovered to be inherent in the medium and technique.