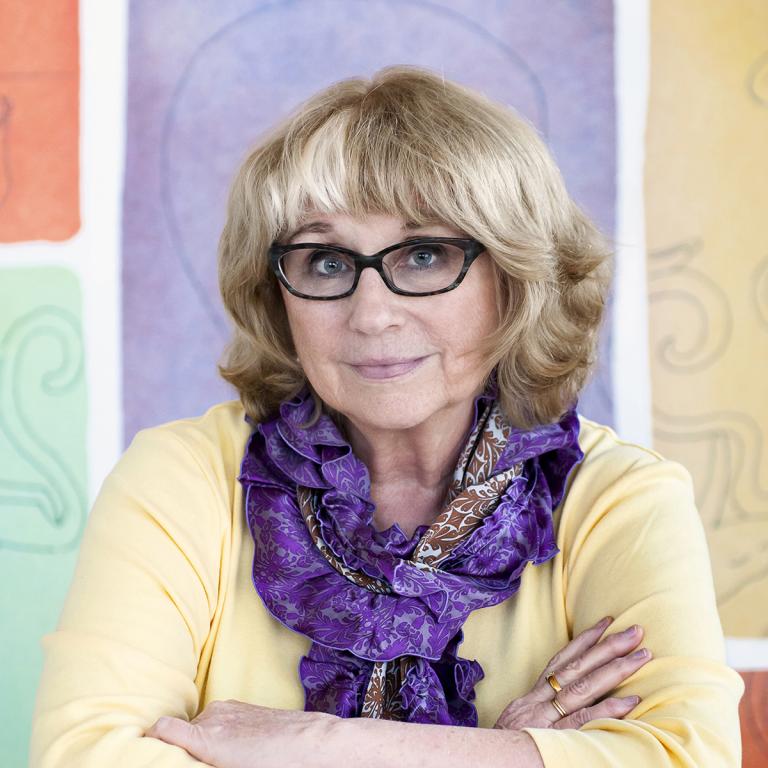 Barbara Nessim is an artist whose daring and prolific work, spanning six decades, defies narrow categorization. In its broadest sense, her artistic production has straddled fine art and illustration, all the while pushing against and reshaping the boundaries of the often-rigid separation between the two fields. With her artworks on paper informing her commercial illustrations, Nessim’s work always begins with line or color, independent of medium, context or application. Her vibrant colorful imagery is figurative, conceptual and also symbolic and deeply intuitive. Its power and enduring relevance lies in its elegant fusion of skillful technique, real social engagement and pop culture resonance. Nessim’s artworks, as her biography, are the story of New York City over the past six decades: the story of evolving gender equity and the story of shifting artistic and cultural landscapes. Her works have been exhibited and collected internationally, including at the V&A and the Bard Graduate Center Gallery. Nessim received a Lifetime Achievement Award from the Pratt Institute in 2015 and was inducted into the Society of Illustrators Hall of Fame in 2020.

As a young, single, professional woman in the early 1960s, her career as an illustrator broke conventions of all sorts. Surrounded and supported early on by prominent illustrators, Nessim became part of a broadly defined milieu of socially minded individuals working within a publicly visible arena. A Bronx native, Nessim graduated from Pratt in 1960 where she studied Graphic Art and Illustration. At a time in which students were encouraged to emulate Abstract Expressionism, the era’s prevailing movement in art, Nessim privately made small-scale paintings with narrative emphasis – short visual stories evoking situations between people. With the encouragement of several key people, in particular Robert Weaver, Nessim’s professor at Pratt, she soon caught the attention of Milton Glaser, Seymour Chwast, Henry Wolf, Robert Benton, among others, who welcomed the much junior Nessim into their circle.
The 1960s was a decade of rich and varied experimentation for Nessim. One of her first series, Man and Machine (1960), represents an early example of the artist’s unique visual vocabulary, in which stylistic echoes of German Expressionism combine with distinctly New York subject matter. Another early series includes imagery drawn from Polaroids Nessim took while documenting 42nd Street and Broadway. Coney Island in the Winter (1963), arguably among her first forays into feminist commentary, features a costumed Superman whisking away a nude and headless female in his arms, while cupping one of her breasts. Her non-traditional use of watercolor, monotype etching and lithography as well as embedded text in image, became signature features bridging the divide between Nessim’s fine art work and commercial illustration. Dozens and dozens of sketchbooks up to the present day, shelved chronologically in her studio, reflect the creative traffic between her different modes of production. Since the early 1960s, Nessim has had her sketchbooks, as both an aesthetic sounding board and also a platform for ideating her commercial work.

Resourceful and determined, Nessim navigated the male-dominated business and advertising culture of the 1960s with audacity and great success. Her first big illustration job was a Doubleday book jacket, which she got by hand-printing personalized linoleum cuts to art directors at numerous publishing houses in New York. Her portfolio at the time even courageously included a fiction story from Seventeen Magazine in which she replaced the published image with her own drawing, so as to inspire the imaginative leap needed to obtain new work. Prominent themes in Nessim’s art, related to the social expectations of women’s relationships with men, with each other and with the world more broadly, found consonance in the mutual influence of Nessim’s lasting friendship with Gloria Steinem. Roommates for six years in the mid-Sixties, the two collaborated on a fumetti, “The Adventures of Max & Jennie”. The plotline roughly follows the story of their friendship at that point, lending insight and advancing perspective into the lives of young independent women.
The lengthy and impressive list of publications in which her illustrations have appeared include, New York Magazine, Harper’s Bazaar, Time, Glamour, Essence Magazine, Sports Illustrated, Rolling Stone, Ms. Magazine, Print Magazine, Savvy, and Working Women. Many of the initial illustration jobs she did out of art school were for self-styled “girlie” magazines such as Swank and Nugget, akin to Playboy. The inclusion of her works was meant to elevate and legitimize the soft porn photos of women and offered Nessim surprising freedom and early exposure. The mere fact that these publications were receptive to her style when others were not, speaks volumes about Nessim’s bold work for the time. Her unshakable pragmatism obscured her conception of the progressive, even transgressive, nature of her illustrations, which often challenge mainstream, binary definitions of gender.
Her figurative drawings frequently fuse human form with geometric or abstract shapes, composing strange and beautiful juxtapositions. The Only Square Breasted Girl in Captivity (1967), for example, titled on the drawing itself, depicts a dark-skinned female with erect orange nipples. Responding to mid-century social pressures for women as objects of fantasy, Nessim’s clever and insightful counter-narratives go beyond strictly conforming to feminist art’s rejection of sexualized treatments of women’s bodies. Nessim’s engagement with cultural conceptions of womanhood, female identity and conventions of beauty continued into the 1970s. These aesthetic threads blossomed further in her WomanGirl series (1971 – 1974) of fashion design-style drawings of lanky nudes with no pubic hair wearing high-laced ballet pointe shoes. Draped with ribbons in primary and secondary colors, Nessim’s WomanGirls sustain her iconic use of color. Across her oeuvre, Nessim’s exquisite and eye-popping palette was cultivated by her part-time work with textiles. She designed coloring and pattern in addition to sketches for engineered prints, along with woven plaids and stripes, processes she relates to Color Field painting by concentrating on relationships between colors and mixing hues.

Alongside and in complement to her artistic practice, Nessim fostered an academic career. When she began in 1967, she was one of only two women teaching at the School of Visual Arts. Over the years there, she taught courses in design, media concepts, illustration, drawing and computer art, before leaving to chair the Illustration Department at Parsons the New School for Design in 1991. Her fundamentally pioneering impulse propelled her to the forefront of computer-generated graphic art in the early 1980s. By way of a fortuitous series of opportunities, TIME Inc. invited her to be an Artist-in- Residence in their Video Information Services Department, which granted her after-hours access to their computers. Fueled by a passion for new mediums, the generative immediacy seduced Nessim. The primitive software available, challenged her to be expressive within the limited visual language of jagged line drawings and a palette of only six colors. Her artistic experimentation with computer assisted works continued through an affiliation with IBM. In the 1990s, her expansive Random Access Memories series, which treats issues such as migration, population growth and diversity, translates the intimacy and insight of her earlier illustration work into an interactive piece for both public installation and private collection. This series positioned her among the very first artists to drive illustrated book design into the digital sphere.

Further evolving her engagement with digital media, Nessim’s more recent bodies of work, beginning with The Model Project (2008 – 2009) and continuing with Chronicles of Beauty (2009 – 2010), explore conceptions of beauty by combining analogue collage with digital printing techniques. For The Model Project, which originated as a collaboration with fashion photographer Karl Rudisill, Nessim collaged photographs from a shoot the two did together with materials from magazines she had collected over the years. The resulting digital prints on aluminum, present an unsettling but alluring amalgamation of intact and disembodied facial features as well as accessories that evoke luxury and seduction. In one, a model attempts to bite an apple with collaged lips that are not her own, while a strand of pearls dangles next her face, cut-out so as to trace and highlight the contour of her cheekbone. The impact of the female body, at once fragmented and preserved, even enhanced, is significant. Partially inspired by The Model Project, Nessim went on to make Chronicles of Beauty, a monumental series in thirteen parts, which was commissioned for the public spaces of the Eventi Hotel in New York City. Here, photographs of classical Greek and Roman sculpture taken by the artist, fuse with contemporary fashion imagery to create a 3,000-year narrative arc of shifting ideals of beauty and desire. In both projects, the artist yet again redirects her own enduring relationship with the fashion industry, while drawing on the thorny history of socially coded ideas of femininity and masculinity.

In her current work, Nessim continues the thread she has cultivated throughout, exploring spectrums of identity through images of ambiguity and coalescence. In her newest series, Wo/men in My Life (2019 – 2020), the artist returns to her trove of sketchbooks – the spine of her artworks, as she calls it – this time to the decade of the 1970s. As much as these works in oil on canvas are based on sketches produced over forty years ago, they are in no way looking backwards, but firmly rooted in the present, looking to the future. With every new work added to her oeuvre, Nessim astonishes with her ability to translate the economy and intuition of a single gesture at 6” x 9” in her sketchbooks, into a 6’ x 4’ painting with remarkable depth. While Wo/men in My Life are not based on actual people, they embody a specificity to Nessim’s artistic universe that renders them unmistakably as characters in her life. These new, impressively scaled canvases are portraits of non-binary individuals, in wild and vivid colors painted to a sensuous velvety texture and peppered with recognizable imagery from six decades of work – ribbons, swirls, geometric shapes that anthropomorphize, impossible hair and silhouetted nipples. Suggestive body parts patterned to near abstraction, such as a grid of tongues peaking down from above, are edgy and exciting.
Another new series, Souls / Soles (2019), comprising ceramic sculptures of shoes, revisits an early leitmotif and brings us once more to the 1970s. Nessim began drawing shoes in the early part of that decade and it was Milton Glaser who first got these drawings of hers on the cover of a new niche hardcover magazine at the time, leading the artist to jobs designing for footwear companies. Having always been drawn to the sculptural quality of shoes as objects, Nessim’s Souls / Soles are whimsical as they integrate forms such as lips and eyes, while offering an opportunity to reflect on notions of gender, consumer culture and even performance. An upcoming solo exhibition at Malin Gallery in Chelsea, will present these new series alongside a group of historical works. Who We Will Be (1976 – 1978), retroactively retitled, proposes a vision of the future imagined by the artist forty years ago, through pastel portraits of people with diverse ethnic and racial backgrounds: a kind of genetic synthesis, as the artist has referred to it. Contextualizing this series from the 1970s within the new bodies of work, exemplifies the way in which Nessim’s art exists outside of time and place, where signifiers of context are fluid and purely idiosyncratic.