The Leonardo/ISAST LASERs are a program of international gatherings that bring artists, scientists, humanists and technologists together for informal presentations, performances and conversations with the wider public. The mission of the LASERs is to encourage contribution to the cultural environment of a region by fostering interdisciplinary dialogue and opportunities for community building to over 40 cities around the world. 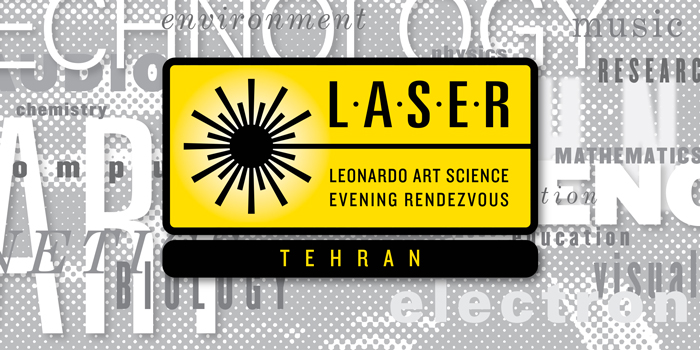 Location: Komod Space, on the Corner of Yaghma and Darband St., Tajrish, Tehran.

Raoufian’s video installation is on display at Komod Space from February 22 - March 01, 2022.

The "Mind Cancer" collection includes assembled or modeled everyday objects and spaces which are somehow involved and associated with cancer. These objects are created from an observer's point of view who metaphorically has brain cancer. The observer sees everything around them or their memories from the perspective of this disease. The purpose of this collection is to show the minds and thoughts of the people who have "Carcinophobia" (the fear of getting cancer), who are experiencing the suffering of having cancer, or the deep grief of losing others because of this disease. People who see cancer cling to minor details of their lives and cannot get rid of this cogitation.

This collection has three subsets, "Wear Cancer," "Eat Cancer!" and "Everyday Life with Cancer”. The "Wear Cancer" series is an invitation to understand the problematic situation of cancer. Sculptures made of fibers and fabrics, wire, latex, papier mache, etc., which sit on the body. They change the appearance, place a heavy burden on the body, and alter human beings' natural movements and functions. These sculptures evoke the challenging times that a person with cancer is going through, thus creating a shared understanding. This artwork consists of cancer tumors formed in the shape of a human face, stuck on a plexiglass box with a space for the neck and a mirror in front of it, both hung from the ceiling. People could place their heads in this box and see themselves in the mirror with these cancer tumors on their faces.

"Eat Cancer!" is the name of an experimental project in which I placed several edible sculptures in the form of cancerous tissues for the audience to eat. This project aims to reduce the magnitude and dangerous aspect of cancer disease to such an extent that it can even be bypassed and swallowed. By putting this extreme issue in such a satirical paradox, I tried to reduce fear and weaken the psychological aspects of the disease for people suffering from this disease and anyone else.

The "Everyday Life with Cancer" is a cancer-themed fashion collection. I have applied forms of cancer tissues in the design of the clothes almost imperceptibly. These clothes have a sculptural approach and, although anyone can entirely wear them, they have gone beyond the definition of ordinary clothes. Wearing these clothes overshadows the movement and process of daily life so that the body is forced to be in inappropriate and unbearable physical positions. My overall goal in this series is to metaphorically describe the hardships of cancer and how it disrupts a person's life.

The birth of art and medicine took place a short distance apart, and the same point to which both owe their birth was the concept of pain. Pain abstraction is clearly seen in works of art; works that have existed since 16,000 years ago. Cancer is one of the most complex and oldest causes of pain in recent years due to its physio-pathological findings. Although historically it is even found in dinosaurs. Symptoms of palaeopathology help us in this regard.

In addition to the concept of pain, other signs of medicine have come to the attention of artists. Ancient Egyptian murals show an abundance of works of art from medical discoveries and medical instructions. 3400 BC Circumcision is seen on a mural in ancient Egypt. This custom existed long before the advent of Judaism and Islam. Looking at the murals and inscriptions that were in the artistic language of prehistoric humans, the concepts of obesity can be seen in the bazaar sequence in the sculptures of Venus. This concept has changed dramatically in recent centuries, with a change in aesthetic attitude and has completely lost its nature.

And recent works of art present this concept in a different way. Other concepts of interest to artists have been the concept of madness and melancholy, which can be seen in the works of the prominent Dutch painter “Hieronymus Bosch”. The effect of his insane ship is to express human fear of what was later called schizophrenia. Plague and leprosy are other concepts considered by artists that date back to antiquity.

In the works of the dear artist, Aynaz Raoufian, we come across the following keywords about cancer. We are faced with concepts such as conquest, extinction, influence, expansion, encroachment, mass and volume. For example, in one of her works, a rude mass has grabbed her beautiful face. This conquest well indicates the nature of cancers of the facial bones, parathyroid glands, larynx and throat.

Topic: Using the Brain Waves as a Gauge for Perception of Fractal Animation

Raoufian’s video installation is on display at Komod Space from February 22 - March 01, 2022.

When
February 22nd, 2022 6:00 PM through  8:00 PM
Location
On the Corner of Yaghma and Darband St
Tehran, 07
Iran, Islamic Republic of
Show large map
Download iCalendar entry for this event. iCalendar feed for this event.