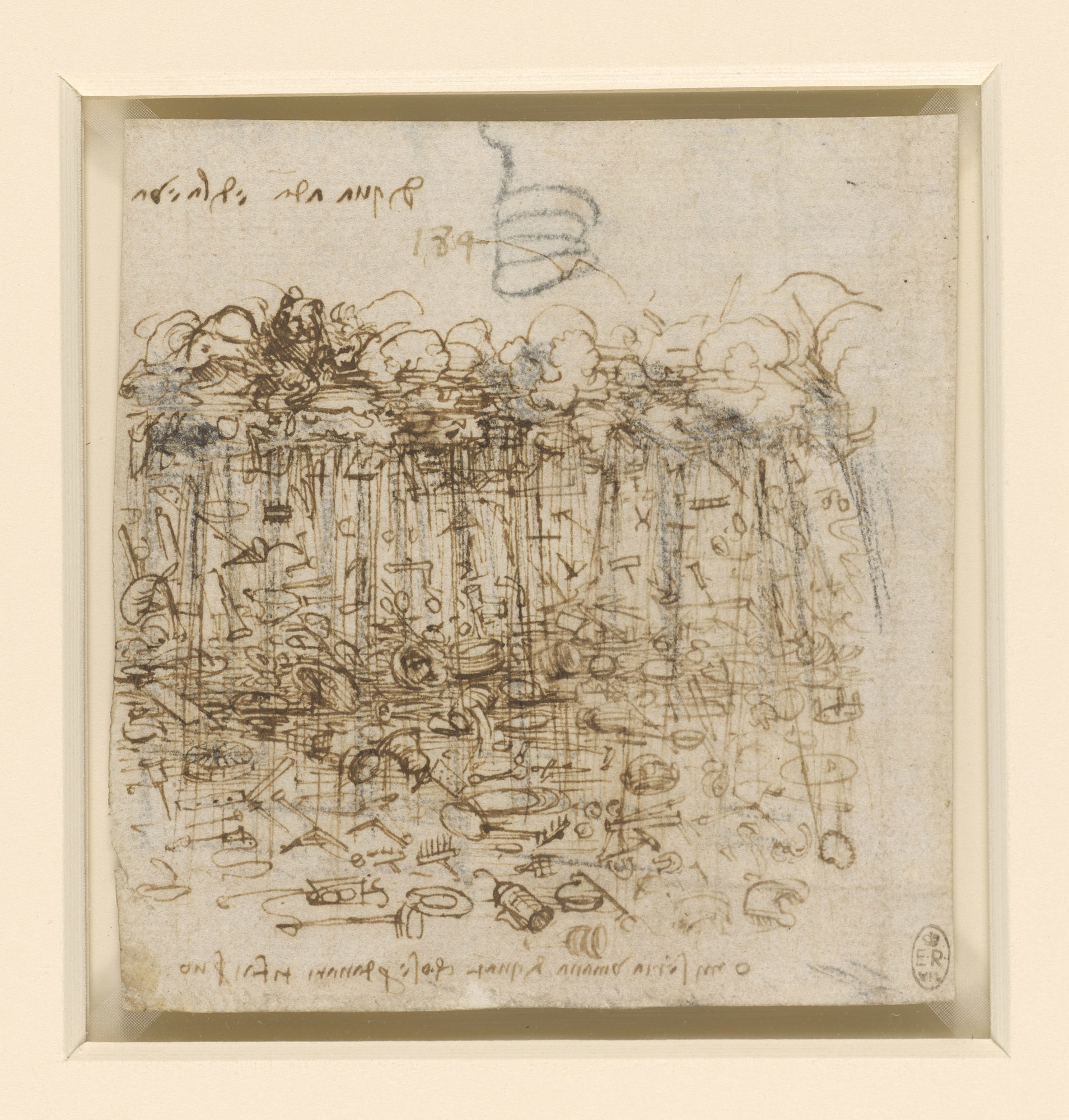 This month’s image by Leonardo, offered as aesthetic context for the ninth celestial sphere of knowledge (that of Ethics, symbolized by the energy field of the primum mobile), carries an unmistakable message and direct warning about Anthropocene cultural norms and sustainability.

Generally referred to as “A Cloudburst of Material Possessions,” sometimes dated circa 1506-1512 (i.e. contemporaneous to the painting of the Mona Lisa), we find the below explanation in the Royal Collection:

“A sketch of a torrent of objects falling to earth from stormclouds – rakes, ladders, lanterns, bagpipes, shears, spectacles and so on. Written below is the lament ‘Oh human misery, how many things you must serve for money’ [italics mine].  Leonardo was fond of allegories of human folly, but what might be a straightforward criticism of materialism is here complicated by a lion prowling in the clouds at top left, as yet unexplained.”

Clearly the lion is a crucial element, and one not so difficult to interpret allegorically.  (Punning on his own name, Leonardo often uses lions as stand-ins for himself.)  In “Cloudburst” the lion is somewhat above and aloof, observing as an artist or scientist would, but aghast and wondering how, if at all possible, to stem the deluge.  Like the lion on the shield in October’s image this figure is also a protector of sorts,  profoundly affected by and concerned with the ethical import of what he observes.

Consider too Leonardo’s parable of the Lion from his rich compendium of instructive animal fables:

“This animal, with his thundering roar, rouses his young the third day after they are born, teaching them the use of all their dormant senses and all the wild things which are in the wood flee away.  This may be compared to the children of Virtue who are roused by the sound of praise and grow up in honorable studies, by which they are more and more elevated; while all that is base flies at the sound, shunning those who are virtuous.  Again, the lion covers over its foot tracks, so that the way it has gone may not be known to its enemies.  Thus it beseems a captain to conceal the secrets of his mind so that the enemy may not know his purpose.”

Ethics and sustainability are fundamentally necessary to any social group but are particularly important during the global transformations confronting not only today's society, economics, and politics but the planet’s biosphere and climate itself.  Adaptive survival requires us to transcend science as mere extraction, production, and consumption; this in turn demands the ethical transformations possible through art (which itself can be misguided by an aesthetic of consumption, profusion, greed, and false scarcity).

The recent JWST image of the Southern Ring Nebula beautifully evokes the image of the primum mobile.  Embodying the motive force which drives all movement in the cosmos, Leonardo wrote about such a force as today's physicists define energy.  In contemplative and imaginative life, which includes the ongoing progress of science and art, Leonardo suggested an analogous source of movement comparable to ethics: the awareness of consequences, possibility, and conscience which impel both responsibility and the actions we take in response to it.

It is difficult to imagine a simpler or more powerful depiction of the Anthropocene ethical landscape, and our human role within it, than Leonardo's "Cloudburst": a strikingly modern and compelling image that combines visual, verbal, and philosophical imagination – ideally in time to help humanity realize lasting solutions.

Next blog:  the origin and nature of sustainable life