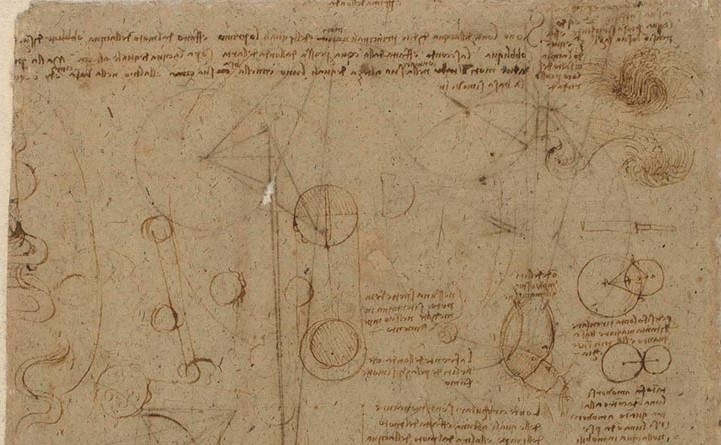 In Tolstoy’s great historical novel War and Peace, the image of planetary orbits is used to illustrate how individual humans are moved in larger patterns which we cannot perceive because relative to us our setting seems static.

Yet while a planet's orbit is predictable and regular, events on its surface often are not.  Randomness affects most phenomena to some degree, and even the constitution of matter itself is partly random.  From an observer’s perspective ten billion years ago the orbits of our solar system would be infinitesimally remote, unpredictable, and subject to chance.

Theories of history, such as that of the “Great Person” which Tolstoy questioned, try to explain why things happen, and predict what things will or must, but they are often just guesses.  As Gödel’s incompleteness theorem states, some things can be predicted by a system’s axioms and some cannot.  We have geometry and we have randomness, sometimes at the same time.

Fortune or chance, i.e. the random, was central in medieval and Renaissance thought.  Dante describes Fortuna as an honored and divine power in Inferno 7 and invokes Maggiore Fortuna before his prophetic dream in Purgatorio 19.  In the Mona Lisa, two hundred years later, Leonardo echoed Dante's description of Fortuna as well as Beatrice and Matelda from the Commedia (representing the vita contemplativa and vita activa, respectively, as in the prophetic dream of Rachel and Leah in Purgatorio 27).  Leonardo's written allegories of Esperienza (meaning both “experience” and “experiment”) include attributes of Fortuna, and the fluctuating chiaroscuro stillness in his famous portrait aligns with medieval concepts of randomness within cycle.

In his writings and images Leonardo unites the unpredictable aspects of Nature, which can be observed but not foreseen, with the laws of physical science in ways that reflect his reading of Lucretius’ De Rerum Natura.  Leonardo sees this union of pattern and randomness reflected in culture as well as Nature, and in the complex evolving relationship between them.

Esperienza as personified in Leonardo’s notebooks was a new concept in the western tradition, unique to Leonardo, and has to date never been proposed as the allegorical principle behind the Mona Lisa.  For Leonardo, Esperienza embodies both of the word’s meanings in Italian – experiment and experience – yet is neither a deity, ancient myth, nor stock medieval character.  The concept resembles il dolce stil novo: natural and graceful, with a vernacular simplicity accessible to all, aesthetically pleasant and scientifically participatory to the fullest and most modern extent possible.  The portrait resonates with Pythagoras’ personification, cited by Dante in Convivio II, of Philosophy, who embodies the love of learning that metaphorically moves the solar system whose several orbits symbolize the ten Aristotelian sciences as planetary spheres or “intelligences.”

The Mona Lisa could well be Leonardo’s reply to Apelles’ legendary allegorical painting Calumny, now lost, which in the Renaissance was often cited as proof that painting could depict complex ideas and even philosophy visually.  As Joost Keizer writes in Leonardo’s Paradox, for Renaissance artists “Allegory was a means to experiment with the period’s expectations of art.  It tested what a less mimetic art could look like, what happened if art approached poetry, how art related to the legacy of the ancient past.”  If Esperienza is the allegory depicted in La Gioconda, Leonardo would have meant for it to prove his assertion, quoted by Keizer, that although “painting does not speak, but rather demonstrates itself [in fact],” it nevertheless “brings philosophy and subtle speculation to the consideration of the nature of all forms.”

Hence the portrait may be of Experience and Experiment, but also an Experiment and an Experience, making the meta-awareness of its design – in Magritte’s sense of “Ceci n'est pas une pipe” -- far more richly complex in its modernity than previous scholarship has recognized.

Since Leonardo himself never attached a title (or any words at all) to the famous La Joconde, perhaps it is appropriate to try the name Esperienza for a while and see if it fits.