The Mindful Mona Lisa: Scientific Allegory and the Algebra of Dream 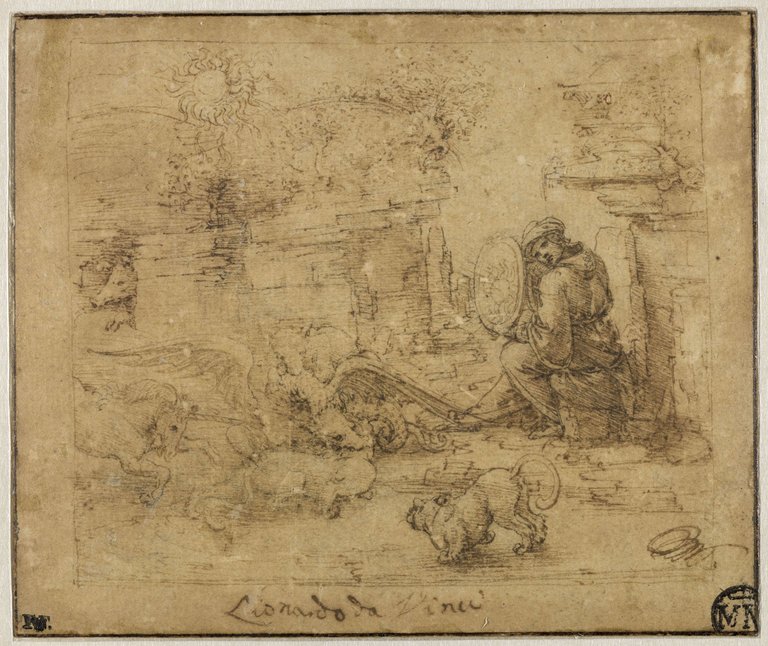 In Canto 9 of Purgatorio, a pivotal moment in the book of the Commedia most freely improvised (since there is no official orthodox account of this realm) and most idiosyncratically the author’s own, Dante speaks directly to his audience:

Reader, you can see clearly how I lift

my matter; do not wonder, therefore, if

I have to call on more art to sustain it.

In this episode Dante falls asleep under the weight of having seen so much of the underworld and its retribution for human error.  His ability to climb the base of Mount Purgatory, and reach the gate of the domain in which learning and change can proceed, is in doubt, and one of several helpers throughout the Commedia -- Saint Lucia in this case -- lifts him up and carries him, still sleeping, up the mountainside to the gate.

However this is not how Dante describes his transport out of ante-purgatory, a state of limbo in which he might linger indefinitely should he fail to go forward with purpose and conviction.  Rather, he offers this most vivid tableau:

At that hour close to morning when the swallow

in memory of her ancient sufferings,

when, free to wander farther from the flesh

and less held fast by cares, our intellect’s

in dream I seemed to see an eagle poised,

with golden pinions, in the sky: its wings

were open; it was ready to swoop down.

In addition to reminding the reader to be aware of allegory (a mode of writing Dante had delineated and extolled in the Convivio), and comparing the saint’s assistance to that of an eagle sent by Jupiter, Canto 9 affirms how states of imaginative insight resemble those of sleep, dream, and fluctuating imagery.  Dante is not saying these images are identical; he is weaving a subtle network of interconnections for aesthetic, narrative, and rhetorical effect.  This blending of ancient with contemporary was at the heart of Renaissance transformation out of the medieval age into the modern.

Such use of symbols and symbolic relationships should not be mistaken for superstition, delusion, or folk tale.  Rather, it is more akin to scientific experiment and analogy, a framework designed to articulate relationships and their morphology in a condensed fashion.  It is not wholly unlike what physicists do when they replace phenomena in nature (such as the speed of light) with an arbitrary symbol (like “c”) for the sake of juxtaposition with other realities (like “m” which is mass, “E” which is energy, and so on).  In algebraic math, such definition of variables is fundamental to correlating diverse quantities and processes.  Dante’s multifaceted account of how imagination works relies on allegory to systematically build layers and depth of meaning.  Similarly, as Joost Keizer writes, “Leonardo organises perception as the discovery of similitude, unveiling nature in its original connectedness with culture, and revealing culture as something similar to the things we observe in nature.”

Author and historian Max Marmor writes persuasively on Leonardo’s use of this “dream” vocabulary from Dante, which revolves around the repeated use of “I seemed to see” rather than “I saw.”  Such “seeming to see” is not quite the recollection of an actual dream, but a mix of reverie and metaphoric insight Dante attributes to the pre-waking hours.  Leonardo uses this vocabulary and style in an early story, “The Cavern,” and elsewhere in his writings, supporting Marmor’s thesis that this “dream narrative reflects, in its specific language, poetic conventions familiar to Leonardo from his reading of Dante’s Divina Commedia.”

Leonardo is renowned for his use of translucent layers in paint (the Mona Lisa in places consisting of as many as thirty), but he was also quite proficient in his use of verbal and symbolic allegory.  Hence we may quite reasonably ask whether Leonardo’s exact copy of the eagle in Botticelli’s illustration of Purgatorio 9, and other references in text and image, suggest that his equations to and equivalencies with the Commedia were designed intentionally by Leonardo -- being both the Renaissance’s greatest engineer and one of its most prolific and unconventional authors -- with precise not accidental balance, order, nuance, and scale.

Marmor suggests that there are also reasonable grounds to “consider the possibility that Leonardo’s last paintings, too, might bear some relationship to Dante’s narrative techniques.”

Next blog:  subtractive development in art and science