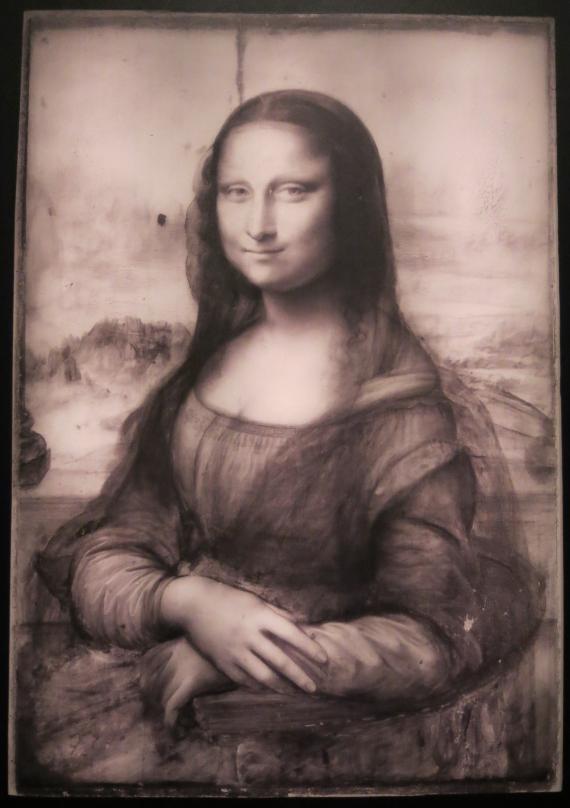 Looking at the infrared image above, what is missing?  The bridge!  This means it was added late in the composition, perhaps even last.  There must have been a reason for the change, but what?

The more I study Dante’s Divina Commedia, the more parallels with Leonardo’s work become apparent.  This is perhaps to be expected, as Dante was the greatest poet of his age and addressed many themes of interest to Leonardo such as art, optics, ethics, astronomy, psychology, human imagination, and the natural sciences.

One can even imagine the Mona Lisa as a subtle reference to the Inferno (left background, with Styx or Acheron), Purgatorio (right background, with Lethe), and Paradiso (the sitter as Beatrice/Fortuna/Esperienza), conceivably in response to Michelino’s famous 1465 painting of Dante in Florence Cathedral.

Although the Commedia is structured around several key river crossings, the only specific bridge I have so far found referenced is Florence’s Ponte Vecchio, which Dante states in Inferno XIII was dedicated originally to the Roman deity Mars and then later to St. John the Baptist.

Further investigation is essential, but since there is no standard symbolism of bridges in ancient or medieval culture it may be a metaphor of Leonardo’s own design without a clear counterpart in Dante’s writings: a key addition with a unique purpose.

One of Leonardo’s last drawings, Woman Standing in a Landscape, appears to include a bridge, whereas Botticelli’s illustration of Purgatorio XXVIII (to which Leonardo’s drawing is often considered a response) does not.  This juxtaposition potentially links the Commedia to the Mona Lisa and the bridge, and warrants full study.  Of first importance is to consider whether there is a bridge in Leonardo's drawing -- which most scholarship does not address -- and if yes, why the figure is pointing downstream in its direction.

The following passages provide additional promising lines of connection between Dante and Leonardo.

Leonardo: “Sound rules are the issue of sound experience — the common mother of all the sciences and arts."

Dante: "From this instance [of confusion] if you will do your part / you may escape by experiment, that being / the spring that feeds the rivers of man's art."  (Paradiso II.94-96)

The Italian "esperienza" is translated as "experiment":

Leonardo: “Men wrongly complain of Experience; with great abuse they accuse her of leading them astray…. Men are unjust in complaining of innocent Experience, constantly accusing her of error and of false evidence.”

Dante: "And this is she so railed at and reviled / that even her debtors in the joys of time / blaspheme her name.  Their oaths are bitter and wild, / but she in her beatitude does not hear. / … she breathes her blessedness and wheels her sphere."  (Inferno VII.91-96, on Fortune)

Leonardo: "Painting is poetry which is seen and not heard, and poetry is a painting which is heard but not seen. These two arts, you may call them both either poetry or painting, have here interchanged the senses by which they penetrate to the intellect."

Dante: "I yearned to know just how our image merges / into that circle, and how it there finds place; / but mine were not the wings for such a flight."  (Paradiso XXXIII.137-138)

Leonardo: "If you [the poet] would say: but I describe for you the Inferno, or Paradise, or other delights or terrors, the painter can beat you at your own game, because he will put it directly in front of you."

Dante: "When finally you stand before the ray / of that Sweet Lady whose bright eye sees all, / from her you will learn the turnings of your way."  (Inferno X.130-132)