As I write this I am searching on line for information about Hannes Leopoldseder. Hannes just died of Covid19 a few days ago. I was contacted by Michaela Wimplinger at Ars Electronica and asked to remember Hannes. As I searched on line I realised again how bad the internet is designed to remember the important or relevant events, people and ideas. Lets apply some radical caring.

I first met Hannes, when I first served on the Prix Ars Electronica Jury in 1989 (ars.electronica.art/prix/en/juries/jury1989). I was invited thanks to Herbert Franke who was a member of the Leonardo Journal Editorial Board; which I had taken over after my father died in 1981. During the jury meetings I got to know Hannes and his so simple dreams of the Ars Electronica Festival to turn Linz, Austria into a cultural capital of the world. He stated later that Linz was a city of iron and steel plagued with environmental problems; he stated “ We put aside iron and steel. We use microelectronics to establish Linz’s future urban material of the future. Electronics as the raw material of the future.” He turned out to be so right.

Secondly he wanted to avoid it to be an isolated event for industry professionals, but rather an exemplar of ‘culture for everyone’. Fundamental to his idea was cultural embedding in the city of Linz; the concerts on the banks of the Danube have attracted 100s of thousands of people, local and global. “Concert’ is a misleading term for the multi-technology events and happenings that are organised each year. When the European Uninion initiated its Science Technology and the Arts Program (STARTS) (www.starts.eu) it was a no-brainer that Linz would become a key hub (starts-prize.aec.at/en) for showing the work of emerging artists.

I remember well the art exhibits housed in parking garage structures, the all night happenings on the banks of the river and city squares that attracted everyday people as well as intellectuals from all over the world. Hannes simple idea has taken root and Linz is a place to visit as a cultural capital of emerging digi-indegenous artists (UNESCO Creative Cities Network (https://en.unesco.org/creative-cities/linz ). Yes steel and iron are great raw materials for art, but electronics is also; and thanks to Hannes Leopoldseder we now have exemplars of the possible.

The internet fails to explain how simple and compelling Hannes was, both in his ideas and his person. One of his  key trouble maker was Christine Schopf. I remember simply the social and intellectual activities that continued 24 hours a day around the jury meetings and the festivals. Yes a re-invention of the famous ‘salons’ that were key drivers of desirable human culture in Vienna and elsewhere. Thank you Hannes and Christine.

I have so much to remember about Hannes that is unavailable on the internet.

Christine Schopf invited me to remember Hannes a year ago on March 20 for his 80th birthday, I did: https://www.youtube.com/watch?v=l87sC2sZ1HU but never got to see him again. Today I googled "roger malina" "hannes leopoldseder" (try it) and found only 730 memories, many of them false; the internet is so ignorant. I did find one photo from 1990. Hannes in the middle on the left, christine schopf (ars.electronica.art/aeblog/en/2020/07/03/christine-schoepf-40-jahre) the right and Herbert Franke on the bottom to the left...and and... 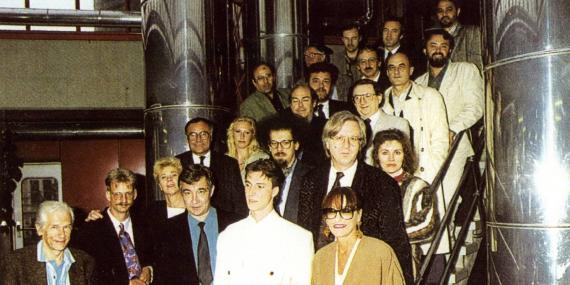 Finally another thought. Hannes was rarely in the center of the photo. As I mentioned above he had skills as a collaborator, using his position of authority as a leader of ORF (austrian radio and television) (thetimeshub.in/hannes-leopoldseder-is-tot-ooe-orf-at/6355) to connect ideas and people independent of their situation. Part of this was his ability to hand over the reigns, such as his work with ZKM director Peter Weibel, and Gerfried Stocker who has been overseeing Ars Electronica.