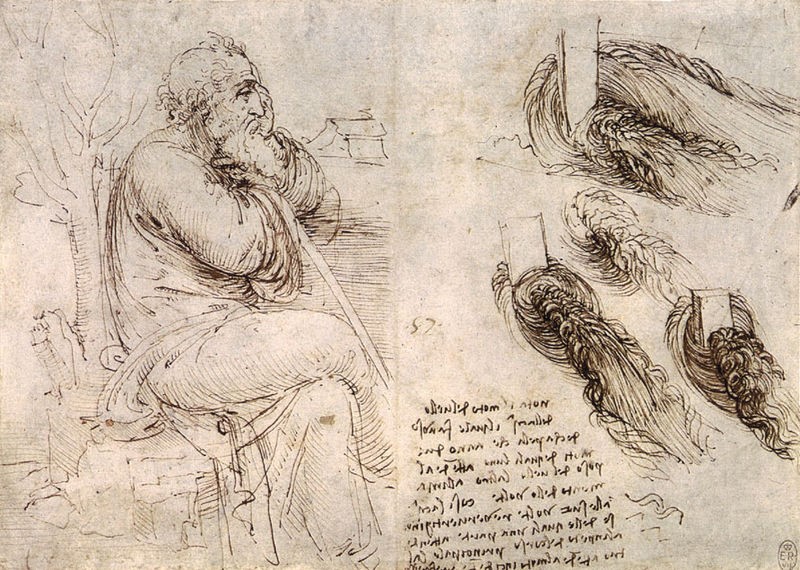 [This is the second of a series of blogs on “The Mindful Mona Lisa.”]

IT was during a five-minute mindful viewing of the Mona Lisa, which I did in July 2019 to honor Leonardo’s 500th anniversary year, that a novel interpretation of the painting first took form.  During those five minutes it appeared to me that the bridge flowed into the garment, returning my eye from the background to the foreground by connecting them spatially and thematically.  This completed the cycles of the painting in an aesthetically rich and balanced resolution.

Knowing this might have been an absurd daydream, I wrote down my impressions to compare them to existing scholarship.

Here are three references I have found that to my surprise confirmed key elements of what I saw:

"Leonardo's magical landscape of fluid and structural transformations finds its echoes in the sitter and her costume.  Lisa's hair obeys the water principle of flow....  The very fine cloth of Lisa's costume adopts analogous patterns of flow -- spiral in the case of the stole over her left shoulder and cascading in little rivulets below her neckline.  These are analogous to the coursing fluids that vivify the woman's body.  Leonardo could not but have projected his knowledge of the inner into the description of the outer."

“Zwijnenberg admits to feeling uneasy before the Mona Lisa, feeling that something is not right: the bridge in the right landscape, which ‘is a carbuncle disfiguring the painting’. The landscape is connected with the sitter only by the bridge; there is no other sign of human activity. Mona Lisa is a microcosm within the macrocosm of the landscape; the bridge ‘bridges’ the microcosm and the macrocosm….”

“Leonardo considered the … mechanics of fluids… [writing that] ‘The great weight of the boat that passes through the river supported from the arc of the bridge, does not increase the weight to the bridge, because the boat weighs precisely, how much the weight of the water that such boat drives away from its place.’  Similar…investigations had accompanied also his grandiose plan to realize…at the confluence of the Main Channel into the Arno and at a very short distance from the Bridge of Buriano, subsequently consecrated for its symbolic valence in the background of the Mona Lisa and of the Virgin with the Yarn Winder, a work of high engineering: a bridge-channel, that might … put in communication the two water courses….”

In a painting that so clearly interweaves a fabric of both images and ideas regarding water, geology, and slow processes of time, is it wise to reject outright any symbolic or thematic meaning for the bridge, and its visual role in the composition?  If not, even hypothetically, it is worth asking if the meanings of the bridge and the spiral shawl could be related.

Next week: full details on how to do your own five-minute mindful viewing of the Mona Lisa!  Till then, #TheMindfulMonaLisa and #TheBridgeGarmentExperienceHypothesis   ?