Fake news has been on the news a lot these days. How easy is it to make one yourself? It turns out to be really easy, as easy as how people generated gossip in the past. You can even have computer write those news for you. How easy to spread the fake news? Well, the modern social media makes this task unprecendently easy and efficient. Better yet, if you have resource and be strategical, you can hire a team of people, create an army of bots, to do the job. It can be spread really fast and appears very convincing.

I used to have an iPad app called Faceswap, it has generated many halirous and terrifying photos of people switching faces. Lately, Deep learning has become so good that it can convincingly switch people's face in a video. Thanks to Anonymous (yes, the coder call himself anonymous), who published a Github repository called deepfakes/faceswap. It contains tools for both training deeplearning model and applying it to a video. Anonymous has done a fantastic job to make it easy for a coder with reasonable experties to use it.

I happened to have two Alienware beasts with decent GPU. So it became impossible to refrain myself from wasting the machine time and my own time to practice some deep fake news making. During the 2 weeks leading into Djerassi Open House, those two machines have been working non-stop on faking videos.

I won't go into details of how to make fake videos, the github repo listed above has fantastic instructions. Here are a list of real fakes my machines have created:

Here is a screen shot of my computer at working. It's really fun to watch the learning process. With each 100 interations, the changing of faces becomes progressiving better.

A smaller room at Djerassi artist barn was turned into the deep fake news room for Djerassi Open House. I use a wonderful software for theater performance called Isadora to randomly loop through about 10 faked up videos in 4 different view ports. So at any moment, each view port is playing different video. Audo volumn from 4 playing videos are each set to drift randomly, in a manner resembles that of drunk walking. The door facing the projecting wall has several holes being dugged out, each with a tube attached in behind pointing to different view ports.

Daiane suggested putting fake eyes behind some of the holes. I think that is a very good idea. So we made some blinking fake eyes with eyeballs from Amazon, black tape around, and fake flickering candle light. 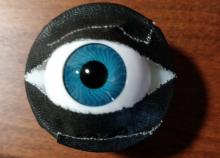 Instruction sheet hanging next to the door to warn people of unintended side effect like improved sense of unbiased judgement. 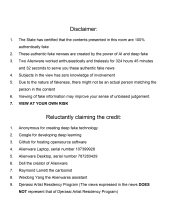 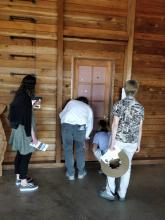 I have to admit, it has been really fun creating those fake news videos. However, is it ethical? Most likely not. For that reason, I'm not sharing the videos here. However this exercise demonstrate how easy it is to make a authentic looking fake news. In this age of lighting speed fiber (lieterarily) and social network, spreading fake news is easy and efficient. Plus, Machine learning and AI makes targeted distribution super effective. It is indeed the golden age for propoganda and mind control.

A side note, in some countries, propoganda department in Universities is real and respected.

2020 is yet another election year.