When our session ends at Djerassi, we're asked to leave behind an artist's page as a memento of our visit.  Because one constant of my time on the ranch was seeing lizards, I thought it would be fun to try to pay tribute to the many different kinds of lizards that live on the property.  Everywhere you go on the ranch, you'll find at least one and often many lizards--scuttling away under a tree stump, fleeing around the side of the house, or diving into the tall grasses leaving only the memory a brief, sharp rustling.  At first, I checked the grasses every time I heard that sound, but I soon learned a simple rule of thumb: if you hear a creature, it's almost definitely a lizard.

The lizards rarely stuck around long enough for me to make a study of them, so I thought I'd work from memory, trying to put in the little bits and glimpses of lizards that I gleaned on my walks.  I'm a writer, not a visual artist, so the lizards were always going to be sloppy and a little squashed-looking, but as long as there was one proper bit in at least a few of the lizards I thought I'd be satisfied. I started at the head each time (lizard heads are fun to draw) and extended those lines, trying to quash the feeling I had each time that the body I was drawing was too long, too something or other.  Lizard bodies are longer than you think and they shade right into tail until suddenly the lizard is at its end.  I had one color of paint and one brush, so I couldn't do their fantastic, freakishly long toes justice. 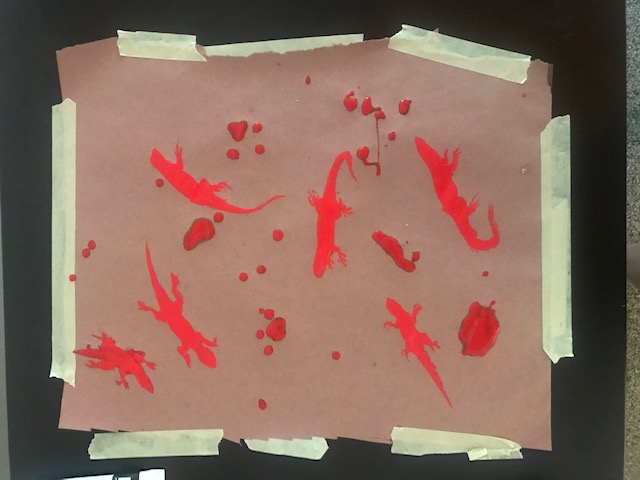 All of these lizards are a little misshapen, especially the one that began as a large blob of paint--can you spot it?--but I think that's fine, because each one has a little bit of something recognizable and satisfyingly lizardlike--which is truer to my experience of the fast-dashing, single-glimpse lizards of the Djerassi Ranch. 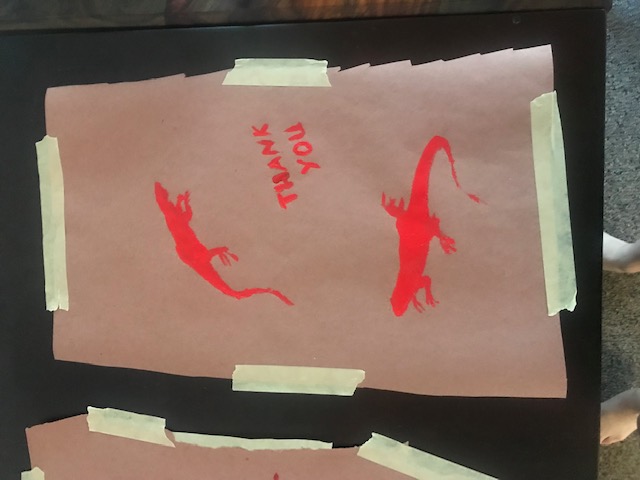