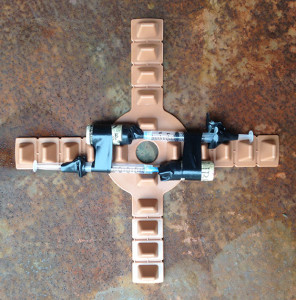 Worked on a few DIY centrifuges. Some more fanciful or dangerous than others. Finally settled in to attaching hypodermic needles (as eppendorf tubes) to the propellers of a box fan. The grinder was just too fast, it tried to take flight and shot medical waste in every direction. I am applying a hand held power sander as a vortex. 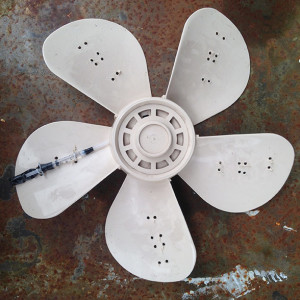 For the warm bath I am attaching needles to corks to float them – steep them in a mug of boiling water. Just gotta make sure there is ice and sperm and figure out how to catch and grind the centipede without over guilting out myself. We scanned him and he got named Keith and there was a bonding. For a venomous creature, centipedes are rather cute and intriguingly personable. Perhaps the keeping alive of the genetic heritage and introducing the centipede genome proximity with the interior of human germ cells is a sort of continuance after death? Short lived as I plan to use the sperm as a glaze. I mean a ceramic glaze and perhaps a frosting.

I was thinking of painting it onto a glazed doughnut or mixing it with frosting for a cupcake. I can stomach eating centisperm from my own body (mixed with Keith byproducts). I would of course prefer to mix the sperm in some vat of human ovum… and screen the blastocysts.

The odds are poor but the number of sperm effected are ~3 million. That changes the statistical assessment. I just don't think I can afford 3 million eggs and there is the time deterrent. It might take years of screening human embroid bodies to find the centiSperm needle in a haystack. I should like to take the time to go CrispR ‘r’ Us on the whole scene and target or walMart the alterations. I would have to bang a load of hox and pax constructs into eggs and sperm and zygotes to get the oneshotz I am looking to raise.

For now I am focusing on finishing Methods of Transgenesis: Shoot, Shock and Inject. This month is shock month and completes the triptych of techno egregiousness. The next year should include designing a library of possible human transfector plasmids based on as wide a range of aesthetic transgenic humans as can be cobbled together. How plastic are we? 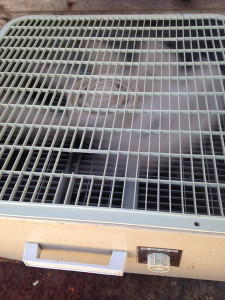