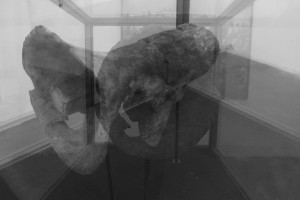 Art and science are inextricably connected. Changing views of the manner in which nature operates bring about corresponding changes in art . . .

If I imagine myself then as a composer in a situation where anything can be done, I imagine making a music a little different from the concerts of ambient sounds we nowadays hear wherever we are when we listen. I imagine this music as technically like my experience: wireless. I imagine all distinctions between art and life removed. Art would then have to do with the opening of ourselves to the world in which we live  –

From a typed letter from John Cage to Billy Kluver

Ecoutes Imaginaires (Imaginary Listening) is the idea of a possible imaginary aural perception emerging from the past while exploring a landscape, and while (sound) walking. Walking is conceived as an art form from which the aural landscape is revealed. Focussing on natural landscapes, reading urban contexts and urban organisations, surrounding architecture through the ear shall provide an alternative and contrasting experience to sight, leading to a combination of several possible realities: Realities, in which memories, cognitions, perceptions are coined and ready to emerge. Realities appearing as multiple layers and folds in which the imaginary sound is ready to be listened. What is imaginary listening? This will most probably stay in the imagination of the (careful) listener and will be constructed in his mind; it will be mostly revealed by memory, cognition, perception, consciousness and/or experience. Bill Viola noted that in the past, hearing voices was related to obedience: The ancient Greeks heard voices. The Homeric epics are full of instances of people guided in their thoughts and actions by an internal voice to which they respond automatically. This suggests a people, as Julian Jaynes has pointed out, not fully exercising what we would consider free will or rational judgement. As with most of us, there is a conversation going on their heads, but it is not with themselves. (Viola in Lander and Lexier 2013: 39) Auditory hallucination might be considered or perhaps schizophonic would be an appropriate term. How to promote a way to perceive places that have existed, through imaginary voices and sounds? Foucault told us that: There are also, probably in every culture, in every civilization, real places - places that do exist and that are formed in the very founding of society - which are something like counter-sites, a kind of effectively enacted utopia in which the real sites, all the other real sites that can be found in the culture, are simultaneously represented, contested, and inverted. Places of this kind are outside of all places, even though it may be possible to indicate their location in reality. (Foucault in Soja 1996: 157) Realities The one that existed The one that remains The one imagined The one merging the one that existed and the one imagined within one’s own imagination.   Bibliography Lander, D. and Lexier, M., 1990. Sounds by Artists. Ontario: Charivari Press Soja, E., W., 1996. THIRDSPACE, Journeys to Los Angeles and Other Real-and-Imagined Places. Cambridge, MA: Blackwell Publishers