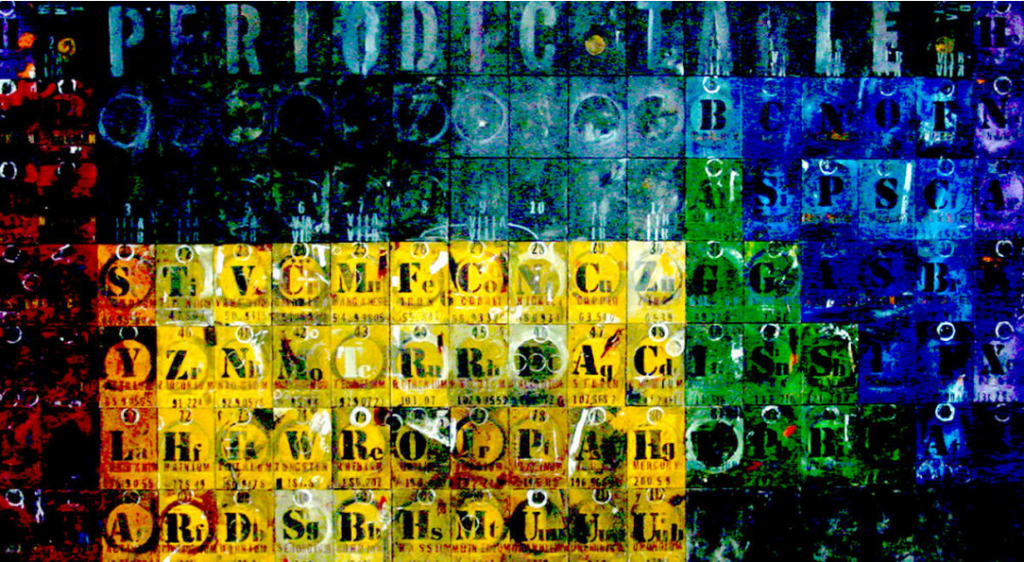 When people ask me what I do, I say I am an organic chemistry professor; when they ask me about my research, I say I focus on molecular aesthetics and the intersections of contemporary art and chemistry. The former usually elicits “Oh, chemistry, I wasn’t very good at that,” and the latter evokes either consternation or further enquiry. Further enquiry yields my one-minute elevator pitch: “I’m interested in the philosophical aesthetics associated with the representations of molecular forms and molecular processes, and how scientists understand these representations.” Ah, they say, “pretty molecules” or more likely, “symmetry?” -- symmetry being the one (and I must say for me the least interesting) aspect of scientific aesthetics that has spilled into the larger culture.

My scientific colleagues have a bit more understanding of what I’m getting at, even if they don’t have a molecular orientation. They have often taken an organic chemistry course and implicitly understand that some molecules and reactions are elegant while others are not; although what this means philosophically might elude them. Yet, my fellow scientists often wonder why I would actually spend time studying anything but science itself, which carries its own set of assumptions about the cultural superiority of science, which are too involved to discuss here.

Surely the philosophical intersections of art and chemistry examined through the lens of molecular aesthetics seems obscure, even among art-science aficionados. And, certainly, it hasn’t always been my focus. I am trained as a physical organic chemist (a dying, although lovely, science) and have worked variously on fluorocarbons, strained ring chemistry and computational chemistry.  This coincidence of scientific training and a life-long love of art (for which I am grateful to my parents) has brought me to this odd confluence of molecules with aesthetics and the philosophies of art and chemistry.  My interest in molecular aesthetics began to develop when I worked with the late great UCSF scientist Peter Kollman on the molecular dynamics of UV photo-damaged DNA.  This kind of science involves computationally visualizing molecular structures; at a certain point in my research I was struck by the how beautiful the visualized molecules I was studying were, particularly when juxtaposed with the grotesque images typically associated with skin cancer.  I became intrigued with how scientists tacitly aestheticize the study of disease states through molecular representations, and fifteen years later I’m still at it, although I have moved away from disease related molecules to other types of molecular structures and processes. My work in this field has led me into the perhaps equally obscure field of philosophy of chemistry, although even within that field aesthetics is pretty marginal. While serving on the Board of Leonardo/ISAST I’ve met many SciArtists and a few ArtScientists, but I still sometimes wonder if there is a community of like-minded scientists out there, somewhere.

For a scientist working on the intersections of science and art can be lonely. While there’s the ISEA, Ars Electronica, and the Transdisciplinary Imaging Conferences, among others, for artists with a scientific bent, gatherings for art-oriented scientists are hard to come by.  Even the LASERs (Leonardo Art Science Evening Rendezvous) that I co-host at the University of San Francisco lean towards the arts.  Piero Scaruffi, founder of the LASER concept, and host of numerous LASERs in the SF Bay Area, tells me that it is difficult to find scientists to participate, even in the land of tech. Sometimes there are art-science symposia at scientific conferences; I hosted one at the national American Chemical Society Meeting in 2012, and in the last four years NetSci has included an Arts, Humanities and Complex Networks Leonardo Satellite Symposium at its annual conference.  There’s even an annual Bridges conference on connections between art and mathematics.  But wouldn’t it be amazing to have a whole cross-disciplinary meeting for scientists engaged in the arts? There must be a lot of us out there. . .somewhere.